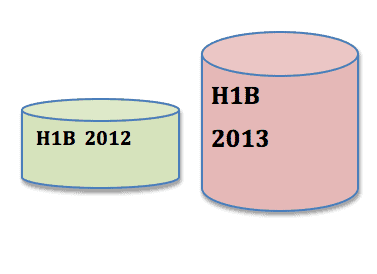 One thing is very clear, there was no H1B lottery for this fiscal year of 2013 as the number of petitions received did not exceed the cap limit. Looking at the current cap count numbers, my first thought was to look at H1B visa FY 2012 cap count numbers to identify the trend.

As we compare the first set of cap numbers released by USCIS last year with this year, regular quota filings almost increased by 3 times. In 2011, for fiscal year 2012, until April 9th  USCIS received 5,900 petitions towards regular cap, whereas this year we have about 17,400 ( almost tripled)…Similarly, the masters degree quota numbers almost doubled from 4,500 last year to 8,200 this year.
Looking at the cap numbers, my first impressions :

US Unemployment rate  and H1B Jobs, Filings  predictions
As we look at the US Economy, the unemployment rate is at its lowest in the last three years. It currently stands at 8.2%, during peak recession it was around 10%. CNN reports that US Fed Chairman Ben Bernake believes that the unemployment rate would reach its lowest of about 5% by 2014, as it is part of the macroeconomic business cycle, the claim is backed by Harvard research as well.
Also, here is an excerpt in CNN article  “Many workers do not have the skills required by employers in the location where employers are seeking jobs,” Wells Fargo Chief Economist John Silvia said in a recent research note.” It is very clear from the above statements that there is an increasing demand for High Skilled workers in America. As H1B visas are given to high-skilled workers, we can expect to see an increase in demand for H1B workers, increasing H1B jobs. All in all, employers are hunting for high skill workers, if they find one, they will most likely sponsor H1B visa. We can expect the H1B filings pace to be high this year due to increasing demand and drop in US Unemployment rate.

What are your thoughts on H1B filings ?
How about US Economy ? 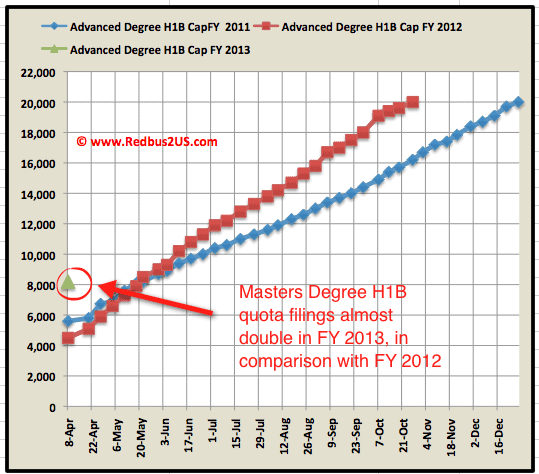