As usual, USCIS updated its weekly summary of H1B cap count numbers for fiscal year 2013 earlier today. The numbers include all the H1B petitions received until Friday, May 4th, 2012. Below is the summary of the update:

Anyways, coming back to H1B Data analysis… As we look at the cap count numbers of this week, we have slight drop in the H1B filings, when compared to last week, April 30th, 2012 H1B 2013 update. Regular quota H1B filings dropped by about 25% from 4,200 last week to 3,300 this week…unlike, Masters degree quota filings stayed constant at 1,400.  Overall, the total number of filings dropped slightly this week. To give you all a perspective,  last year around the same time May 2011 H1B count , we had about 1,700 petitions filed. You can look at the H1B FY 2012 filings trend in below graph as well and compare it with FY 2013 trend.  You can also follow the weekly cap count update at H1B Visa 2013 Tracker

As we look at the unemployment and jobs scenario in America, the jobless claims decreased last week, after a four week rise in the past 4 weeks. It is a good sign, but economists like to look at the 4 week average to adjust seasonal effects like easter holiday and to consider other part time contract jobs effects. The unemployment rate still holds at 8.2% and no big movement in that number. Also, it is reported that there here has been less hiring in April and it is heating up the political race for president between President Obama and Mitt Romney. From  Advanced skilled labor requirement perspective, which is H1B demand, there should not be much changes and we can expect to have a healthy H1B Sponsorship and hiring for rest of the 2013 season…

What are your thoughts ? How is your experience looking for H1B sponsor ? 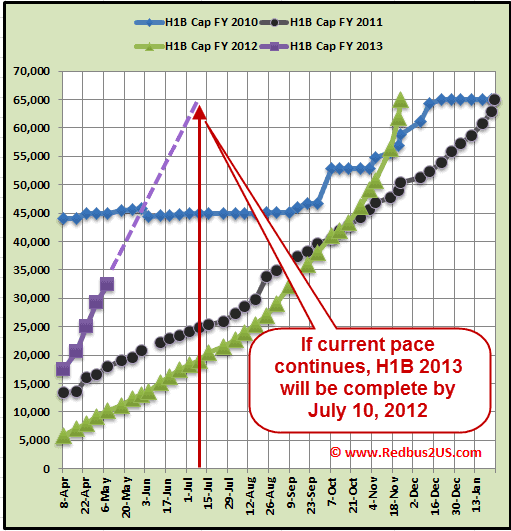 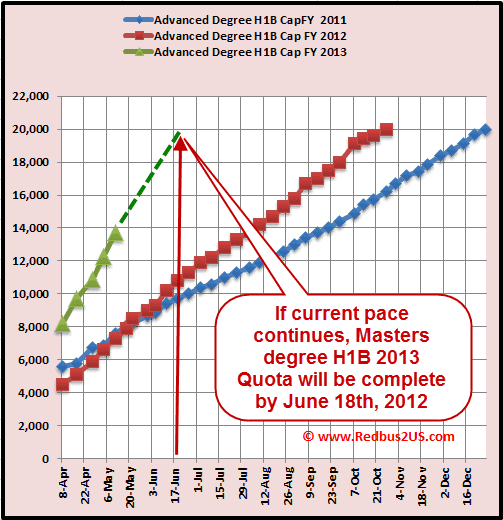