Updated : Previous content did not had one week data, current updates includes missing week data and correct updates. Thanks to Puneet !

USCIS updated the H1B cap count numbers today. As of January 7th, 2011 the updated H1B petition filing numbers as reported by USCIS are :

As most of you know, Advanced degree H1B cap was filled couple weeks ago ( by Dec 24th, 2010). USCIS reported that there were about 1,400 petitions filed under regular quota in last week  i.e., between Dec 31st and Jan 7th, 2011. Overall, the total H1B petitions filed decreased consistently in the last two weeks i.e, 1,500 in week of Dec 24th until Dec 31st and 1,400 this week (between Dec 31st and  Jan 7th). The decrease in petitions can be attributed to holiday season and law offices being closed. I speculate that the volume of  H1B petitions that will be filed in the next couple weeks will be very high due to two reasons. Firstly, the outlook for jobs and economy looks very good based on analysts numbers…secondly, human psychology, good number of people (could be employers) tend to do things in the last minute…We are almost at the last few weeks rushing towards the cap completion…In total, we are left with only 6,300 visas…of them, our best case  calculation after setting out 1000 visas for Singapore and Chile trade agreement would be 5,300. As we do not know how many H1Bs were left last year that were related to Singapore and Chile trade agreements, I assumed 2009 numbers and did speculation..Read the H1B cap Analysis on Dec 21st, where I explain the whole scenario. If you are still interested in filing H1B petition for FY 2011 cap, now is the time…Do NOT delay !   (I will try to write economy review later this week.)

What do you think of H1B cap count  reaching cap  ? 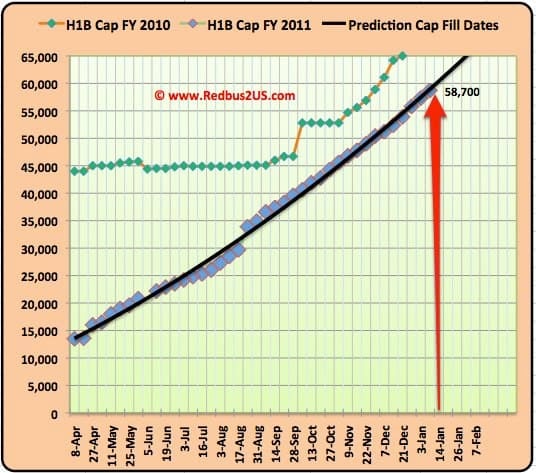 Change Log : Article updated as per Puneet’s correction. Thanks  Puneet !