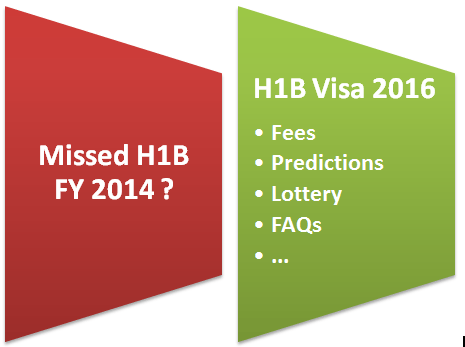 Planning for next H1B season, Check out H1B Visa 2017 FAQs

As many of you know, H1B Visa 2015 quota was over in the first week and a whopping 172,500 H1B petitions were received in first week by USCIS.  H1B Lottery / random selection was held by USCIS to select 85,000 H1B petitions to fulfil the work permit cap. Many of the unlucky ones are already wondering about next year H1B Visa quota. Also, some of you are planning for H1B visa for next year, you also would be wondering regarding the same. This article addresses many of the common questions, it will be updated constantly, whenever any changes to info.  Bookmark this page !  To start with, firstly the news updates on this season, followed by many commonly asked questions.

USCIS will accept petitions for H1B Visa 2016 season starting from April 1st, 2015.  USCIS did a press release on March 12th outlining the details. Read summary of press release by USCIS on H1B 2016 .

Will there be lottery again for H1B Visa 2016 ? Predictions ?

H1B Visa quota cap count is the total number of petitions that USCIS will accept for a fiscal year to provide temporary work permit for highly skilled workers.  For the 2016 fiscal year, the cap count is as below :

It depends on your situation. Below are few scenarios and your plan.

We have published step by step plan, you can read the article How to plan for H1B Visa 2016 ?Step by Step Guide

This is a million dollar question !  One of the biggest challenges is to find a good sponsor that can offer you a job and wait for you to start work after 6 months of filing your petition.  You should review the detail article on How to find H1B Sponsors for FY 2015. Your first place of start is to find the H1B Sponsors in an area or by company. Use our H1B Visa Sponsors Database to search and filter. Read this article on details on how to search in our H1B Sponsor database. We keep the database updated as DOL publishes data. Do NOT share your email or phone number on our website as comments, there are many people do H1B Sponsorship fraud by requesting money using your contact info. RedBus2US.com never provides personal guidance on H1B sponsors or seeks money from anyone, we only display publicly available data on our H1B Sponsors Database page. We DO NOT sponsor H1Bs or guide anyone. Beware of H1B sponsorship Fraud !

What about Comprehensive Immigration Reform ( CIR) – H1B Visa Changes ? What are they ?

There have been some proposed changes to the H1B Visa program to cater to the demand in the  US economy as part of the Comprehensive Immigration reform. Below are some of the proposed changes.

These were proposed in 2013, but nothing has moved significantly and all the above are just proposed rules. We are not sure when they will be implemented. You can read  Summary of CIR – Immigration reform – H1B Visa and Green Card  to get an idea. The latest update is that Obama has taken executive action on Immigration in Nov  2014  and none of the below are included as part of that.  Stay tuned for updates.

There are various components of the fee. The H1B Application filing fee could range anywhere from $1,600 USD to $4,400 depending on the size of the company. The attorney fee can range from $500 to $3000 depending on the attorney. If you apply for premium processing that is another $1,225. The fees has not changed in the past couple of years for FY 2014 and FY 2015. Unless USCIS revises fee based on immigration reform, it should be same. We will keep you all posted. For complete details of the fee by components and break up, read the article H1B Visa  Fees and Who Pays for What ?

As you know, certain H4 visa holders are now eligible for EAD. The H4 Visa EAD Rule Passed earlier in 2015 and is effective from May 26, 2015.  USCIS will start accepting applications for EAD from those eligible H4 visa holders starting from May 26th. The question is that will that have an impact on number of H1B petitions for this fiscal year  ?  It very likely will have certain impact on the number of H1B applications that are filed for this year 2016 quota. Many of the H4 holders, who would now be eligible for EAD, may not apply for H1B visa, just because it gives them more flexibility to work and more choices to work as well. We would have to wait and see, how much of an impact that would have, but it is very straightforward and no brainer for eligible H4 visa holder to avoid the H1B processing.

USCIS updated in their press release that the premium processing will be accepted for FY 2016 quota and they will only begin that “no later than May 11, 2015”. What it means for the petitioners is that the official 15 day premium processing clock starts from May 11th, 2015 and their petition could be adjudicated within 15 days from May 11th, which would be May 26th, 2015.  USCIS can process them earlier as well, but their new timeline is just indication for setting the right expectations to meet the stipulated time frame for premium processing.

As in previous years, we have created a page, where would track the cap count updates for FY 2016. You may check out  H1B visa 2016 Cap Count Tracker.

While you wait, you can check out April 1st – USCIS H1B Visa 2016 Season Starts Today, When to expect Lottery ?