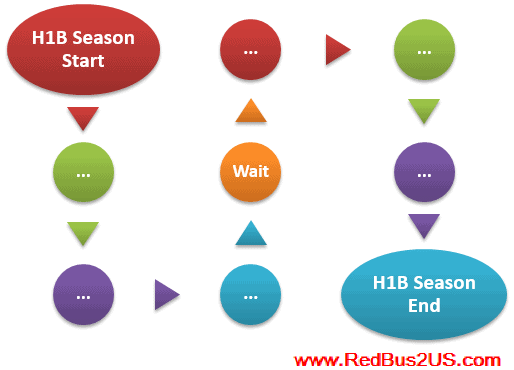 Today is probably the most awaited day for many of the international students and professionals, who are pursuing their dream to work in US.  As exciting as it can be, it is a very anxious period for all of them as they are waiting for the news from USCIS regarding the number of petitions filed for H1B Visa 2016 quota and if there would be a lottery for the same.  Let me try to explain what would happen in the next few days, so that you calm your nerves down.

What is the minimum and maximum duration for H1B FY 2016 season?

It can range from 5 days to 10 months or more. The minimum H1B season duration would be for at least 5 business days, starting from April 1st, 2015. So, technically it would be until close of business day of April 7th.  If USCIS receives more than 85,000 petitions during this time, then the season closes and USCIS will conduct a lottery to select those 85,000 petitions to fulfil the H1B cap.   If USCIS does not receive enough petitions, which is 20,000 for US Masters students’ quota and 65,000 for regular quota, then USCIS will continue to accept until the H1B cap count of 85,000 is met. During recession period, the H1B Visa 2011 cap was reached on Jan 26th , technically it lasted for 10 months.  But, as per our H1B Visa 2016 Predictions Analysis , we expect a lottery for FY 2016 and cap would be complete by April 7th.

When would USCIS release official news on H1B Visa 2016 Season?

Usually, USCIS reports the official news regarding the H1B season petitions, counts, etc. after the first 5 business days.  Last year for H1B Visa 2015 season, USCIS reported their first official H1B cap reached news on April 7th, 2014.  We can expect first official news to be released on the same day, which is April 7th, Tuesday.  However, we may get some insider news from AILA and other attorneys regarding the petitions flow around April 3rd, it will not be official USCIS though 😉 …we will monitor the social media and keep our readers posted on the same updates.

If lottery, when would that be conducted for  H1B 2016 quota by USCIS ?

How Long does it take for me know, if I am selected in Lottery?

This is a very tricky question…it can take anywhere from few days to few months, to know if you were selected in the lottery. This is the most painful part of the H1B lottery….the long wait. If you were to file under premium processing, you may expect results as early as April second week and if regular processing, it can last until late June. Last year, petitions rejections were received as late as even June…So, there is no precise time.  You cannot be sure, if your petition was not picked until you received an official rejection notice from USCIS stating that your petition was not selected…Typically employers look at the checks cashed and get a hunch that the petition was selected.

I know the waiting can be very painful folks…All I can say is, stay calm and wait…We will keep you all posted with the slightest updates either official or unofficial. Stay tuned!  You may track the updates on H1B Visa 2016 Tracker page

Do you have any more questions?  Any thoughts to add? Leave a comment…