USCIS released updated H1B cap count numbers couple of days ago, they updated cap count by considering all the petitions received until May 13th, 2011.  I updated the cap count on our H1B Visa 2012 Cap Count Tracking page earlier, but did not get a chance to write article earlier…Anyways,Here are the numbers :

If we look at the movement, there was not much difference from previous week, i.e. May 10th, H1B 2012 cap update…regular quota filings remained constant at 1000, whereas the advanced degree quota filings decreased slightly by about 100 petitions. Thats not much…The pace of regular quota is self explanatory as nothing significant happened in the past week…But, if we look at Advanced degree cap, Spring graduation week…In fact, many students would be waiting to get their final transcript and get degree…it may take a week or two depending on the school for the grades to be posted….We may expect surge in Advanced degree cap filings in the next  2 to 3 weeks.  Based on the data so far, if we look at prediction graphs below, advanced degree cap may exhaust by last week of septemeber, 2011…unlike, the regular cap will last well beyond February 2012…

As we look at the US economy, Conference Board, published a report stating that US workers have been working longer and retiring later..for instance,in health care “In 2009-2010, only 1.55 percent of full-time workers aged 55-64 retired within 12 months, compared with almost 4 percent in 2004-2007.”…I think, from H1B Workers’ perspective, it is not so good because later retirement means less highly skilled jobs created after retirement. Labor department reported that the initial jobless claims decreased by about 30,000…despite the overall economic recovery is reported to be sluggish..in any case, stock indexes were in positive territory today with the positive job news…

What are your thoughts on the economic recovery ?
How about MS Graduates, How many of you plan to apply for H1B for 2012 Quota ? 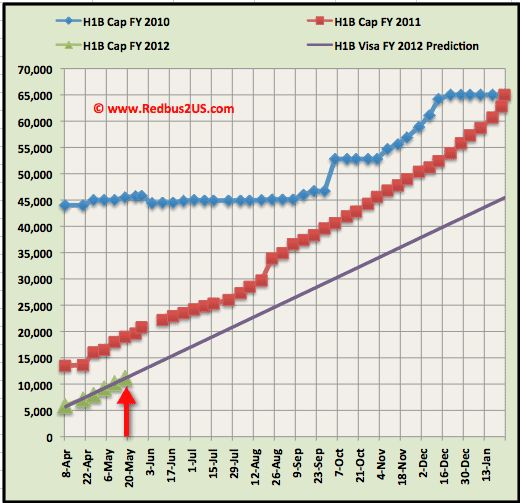 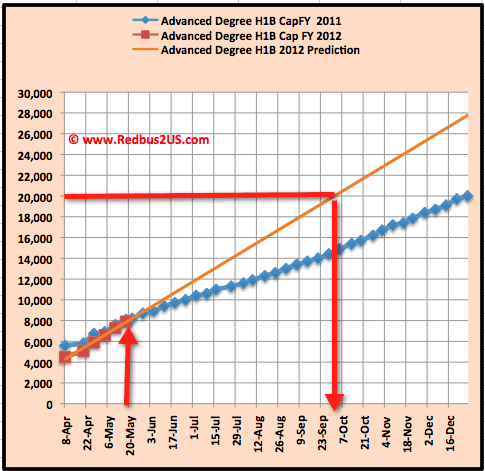