USCIS has released its weekly H1B cap count updates for FY 2013 yesterday. The cap count update includes petitions received until April 20th, 2012. Below are the numbers:

H1B Cap count numbers Analysis – Increased filings
Well folks, there is some good movement in H1B cap count numbers. If we compare the cap count numbers from this week, with last week April 17th, H1B 2013 update numbers, the regular quota filings have gone up by 1200 from 3,200 last week to 4,400 this week. Unlike, the advanced degree filings are down slightly by 300 from 1,500 last week to 1200 this week. Overall, the number of filings have gone up by about 900.  I am not sure, if we can expect the increase every week, but something to watch out…I have done some high level predictions using linear regression ( not enough data), if we expect the same pace of H1B petitions filings:

From US Economy perspective, the US Jobless claims are up slightly. They have been up slightly from the four year low and trending up. Recent CNN Economists survey says that the unemployment may go down to 8% from 8.2% by the end of the year and we may not expect speedy recovery…On the other hand, positive news from  National Association of Business Economics’ survey, saying that employers expect to do more hiring in the next 6 months. From H1B visa jobs perspective, it is a good news as there will be more skilled workers required in 2012 and 2013.

What are your thoughts on US jobs and economy ? 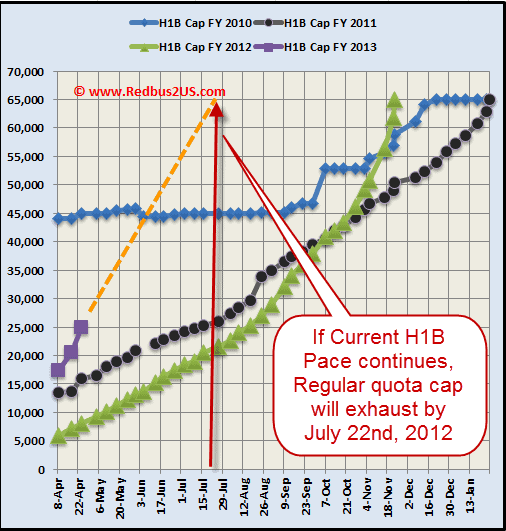 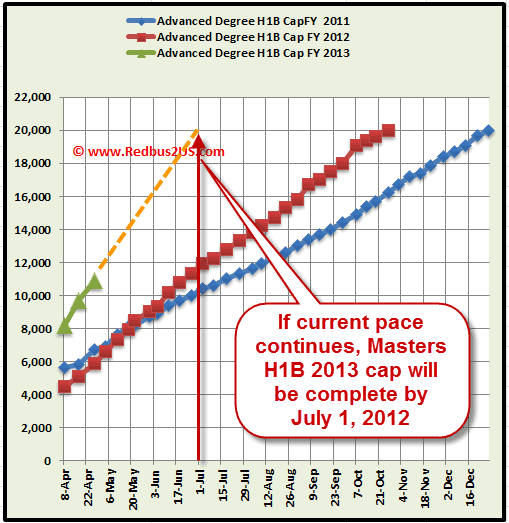