As most of you know, in general, USCIS accepts H1B visa petitions for the next fiscal year beginning April 1st of previous year. Last year USICS did a press release on March 18th, 2011, indicating that it would accept H1B visas for Fiscal Year (FY) 2012 starting April 1st. As of today, we do not have any official press release from USCIS stating the date of accepting H1B visa petitions for fiscal year 2013. But, it is assumed, based on previous history, that USICS would accept H1B visa petitions starting on April 1st. So, we can assume that for H1B visa FY 2013, USCIS would start to accept H1B petitions from April 2nd, as April 1st is Sunday. Also, Some of you may have followed the H1B visa 2013 plan we suggested. As we had H1B lottery in some of the previous years, some of you might be curious to know the lottery situation of H1B visa filings for fiscal year 2013.  As I am not an oracle, I believe in past data for any predictions. Check out below graph. 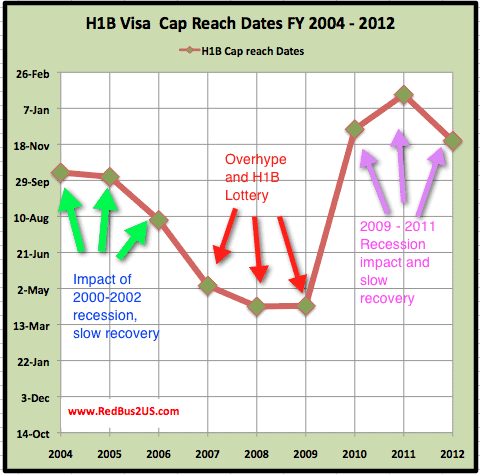 From the graph, it is very clear that US economy is recovering from recession as the H1B cap for FY 2012 reached in November 2011, whereas it was January 26 for FY 2011.  What can we expect for FY 2013 ?   Based on the above data analysis,we can definitely tell that H1B cap reach date for fiscal year 2013 would be earlier than November. What it would mean is that the number of petitions filed before that would be more…But, would that mean there will be a H1B lottery ? In my view, it is very unlikely to have H1B lottery for fiscal year 2013. I say that because of the below reasons :

All the above reasons are not very encouraging for H1B sponsors. With all these complexities, employers are very cautious about selecting candidates for H1B employment and visa sponsorship. In fact, the rate of H1B filings by consulting companies have gone down drastically after the new guidelines for H1B visa filings in 2011.

You can also check out our last year’s H1B visa FY 2012 lottery prediction.

What are your predictions ?