DHS’s rule titled “Inadmissibility on Public Charge Grounds”, popularly known as “the Public Charge Rule” is one of the biggest changes to US legal immigration in many years. It was officially published on Aug 14th 2019,  in Federal Register as final rule by USCIS. The Public Charge rule was blocked by many courts with injunction order in 2019. Finally on Jan 30th, 2020 Supreme court gave judgement allowing USCIS/DHS to implement the public charge rule as it was originally proposed. USCIS released press note indicating that Public Charge will be effective from Feb 24, 2020.

The final rule document is a massive 837-page document, formatted to fit in 217 pages in federal register. There were 266,077 comments from public for the proposed rule…

The rule impacts a lot of US visa categories and green card (GC) seekers. In this article, we will focus on the general basics of “Public Charge Rule”, its significance, how they will determine, if someone will likely be a public charge, exclusions & exemptions, key factors that are considered for determination, if someone is likely to be a public charge and how it will impact H1B, H4, and L1 visa holders, including Green Card seekers. At the end we will also have FAQs clarifying common questions.

Why is Public Charge Rule a big deal? What is its significance in US Immigration History ?

It is estimated by US Govt. that this new rule would impact a population of about 382,264 annually to be reviewed under this new rule…It is also estimated that the new public charge rule would save about $2.47 Billion Dollars annually in public benefits…Migration Policy Institute estimates that the new income requirement would have denied about 56% (2.3 Million ) of family based green card applicants that were issued in last 5 years. Also, immigration firm Boundless estimates, it could impact over 50% or 200,000 marriage based green cards given every year. It also will have serious effects on the diversity of immigrants in US.

What is the general “Public Charge Rule” in US ?  What is the background ? Is it fully new ?

Public charge rule is not new, it has been there in the US since 1880s. There were some revisions done over the years. The general background of public charge rule is that anyone planning to move to America as permanent resident or get green card should not be primarily dependent on Government benefits for their livelihood in the US. The public charge rule basically wants people moving to US be self-sufficient and they do not become “public charge” or “burden to the US tax payers or US Govt”.  The logic is that immigrants planning to settle in US cannot just become burden by using the US Government programs like food stamps, Medicare, housing benefits, etc. and they need to be self-sufficient. In fact, there are sponsor affidavits (legal contract) in place today for family sponsored green cards categories to make sure the moving family members do not become a public charge.

Over the years, the applicability of the public charge rule has been changing with government policies. Since Trump Administration took office, they haven pushing many immigration related changes that came from Buy American, Hire American EO, Many H1B Visa related changes, etc. Similarly, in January 2018, the US consular posts also implemented revised guidelines to ensure Visa officers assess the applicants, if they would become a “Public Charge” for issuance of visas. Read Public Charge Rules at FAM State.gov.

What is a ‘Public Benefit’ ?   When does it become a ‘Public Charge’ ?

Below is general scope that USCIS will consider as ‘public benefit’ used by an individual.

If anyone, unless exempted, uses any of the above public benefits for more than 12 months in aggregate within a 36-month period, they will be considered as “public charge” and inadmissible on public charge grounds. If they use two benefits in a month, that is treated as 2 months and added towards the total 12 months aggregate.

Which Individuals does the Public Charge rule apply to ? Direct Recipients only ?

Unless, they are exempted by US Congress, below are the various categories of individuals that public charge rule will apply:

Only the direct recipients of the benefits are considered for the public charge rule, who used them for their own benefit. Meaning, if someone in your family receives benefits, those benefits apply only to them and does not apply to you for determining public charge inadmissibility.  Also, it does not apply to anyone such as guardians, who are receiving benefits on someone else behalf, including someone using power of attorney.

What benefits are excluded ? Who else are exempted from the Public Charge Rule ?

Exceptions to the above public charge rule are below categories and individuals:

Requirement of Bond, if someone is determined as Public Charge

USCIS says that to determine if someone would become ‘Public Charge’ is prospective ( happens in future) and they will consider the overall situation and circumstances of the individuals.  Also, with USCIS discretion, they may request a foreigner to submit a minimum bond of $8,100 (can be higher based on case) and allow them to file for adjustment of status, though they were determined as inadmissible based on public charge grounds.

How does USCIS determine, if someone would be a potential Public Charge in Future ?

USCIS says that they will look at the benefits used by individuals and review them against the 12 month aggregate benefits in last 36 months. In addition, they also will look at the below factors to determine, if they could “likely become a public charge at anytime in the future”. They will give weightage to below factors as positive or negative and determine, if someone could be a public charge in future.

What factors have heavy weightage to determine potential Public Charge in Future?

USCIS says that they will look at the individual situation and determine the factors based on their conditions. Below are some examples.

Read detail article on How USCIS uses Form I-944 to determine Public Charge based on various factors.

Now that we understand the new public charge rule, it’s importance, what it means and who all does it apply to and how USCIS determines if someone could become a public charge in future, let’s look at the impact for temporary work visa holders such as H1B, L1 and their dependents on H4, L2 visas.

On a very high level, the impact for work visas holders such as H1B Visa or L1 Visa, including H4 Dependent Visa is very minimal. The reason is that most of these work visa holders arrive in US with a job and have enough income to support their family and also get employer’s private insurance in most cases, except few. With the new Public Charge rule, USCIS would like to ensure that the temporary work visa holders and their dependents do not become a public charge as well. So, they have added requirements that work visa holders and their dependents applying for extensions, transfers & change of status will be subject to the public charge rule review.

All the applicants who file form I-129 for H1B, L1 for extensions, transfers or COS, and their dependents either H4, F1 or L2 holder using form I-539 Form for extensions or COS will be subject to the public charge review. See below screenshot.

Does in-state tuition paid fall under benefit for Public Charge ?

No. Any education or public schools related benefits like attending primary or secondary school education does not count for the public charge determination.

Does past usage of Premium Tax Credits, Subsides count for Public Charge?

No. Premium tax Credits or subsidies related to Obamacare are not a public benefit, so do not count for public charge. But, having a private insurance will be a big positive factor for overall public charge determination. If you are using premium tax credits or any subsidies in the past, which is before February 24, 2020, they will not count or even in future as well, they do not count. But, if you stop using them and get private insurance by February 24, 2020, it will weight in for positive factor.

Does Scholarships in Universities count for Public Charge ?

No, USCIS does not talk about scholarships and classify it as public benefit, so will not count towards public charge determination.

No. There is no explicit mention of H4 or L2 EADs not working as public charge.

Huge Emergency Hospital Bill – Waiver in past, does it count as public charge ?

No. Any emergency hospital expenses waiver or Medicare does not count towards public charge. Example, if you had got $10,000 waiver for $15,000 hospital bill, then it is not counted for public charge.

No. SDI related benefits like maternity, paternity leaves are not listed as public benefit in the new rule, so will not count towards the public charge determination

No, they are not listed as public benefit or weighing factor. So, they do not count towards public charge.

I got laid off on H4 EAD and getting unemployment insurance and doing certification course with the help of TAA , TRA. Does it count for public charge ?

No. The unemployment insurance is not listed as public benefit, so it will not count towards public charge. Read below one for overall guidance.

How do I know, if my subsidy, insurance or tax credits is not a public charge ?

USCIS has given clear guidance that, if a benefit is not listed explicitly in the rule, then it is not classified as public benefit and will not count towards the public charge determination. So, don’t sweat too much on this. See below screenshot. 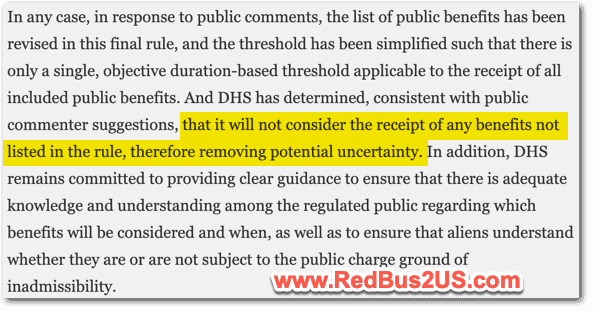 When will the public charge bill go into effect ?

From when will the public benefits be counted to determine public charge ?

Only public benefits used from February 24, 2020, will be counted towards determination of public charge.

Yes, it will very likely add more delays to the current processing times. Because, the adjudicator has to review the application, if there was any public benefit used and will count towards public charge. Also, as needed they may also require form I-944 “Declaration of Self-Sufficiency, which could even lead to more delays as that is a more comprehensive form.

Will the Public Charge Rule face any legal challenges in Court ?

Well, in fact, many courts blocked the public charge rule from going into effect on Oct 15th, 2019. But, Trump administration took the case to Supreme court and they got judgment in favor of them and lifted the injunction order. So, except in Illinois, USCIS is cleared to implement public charge rule.

That’s about it folks…What do you think of the Public Charge Bill ? How else do you think, it will impact ? Add your comments, thoughts.