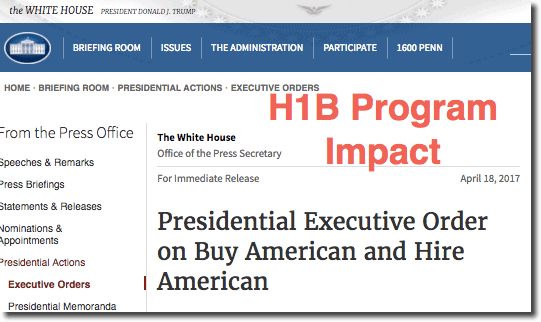 As updated yesterday by President’s office that Trump will sign an Executive Order today, it happened earlier today.  President Trump signed an executive order called “Buy American and Hire American” today in Wisconsin.  To be more focused for our readers, we will only review, assess impact on the Hire American aspects that are related to H1B Visa Program.

In general, President Trump does not have enough power to sign an executive order and change the H1B Program overnight.  Most of the H1B program’s changes are vested in the hands of congress and they will need to take legislative action to implement any major changes or reform the program. The current signed Executive Order by Trump will NOT have any immediate impact on the H1B Program, it will take time.

The executive order signed does not tell anything more than saying that all agencies to do a thorough review of the current H1B Program and how best to protect US workers and prevent abuse of H1B program. Once the required changes are suggested, they will have to go through either standard rule making process or approved by congress to implement the same.  In general, the temporary worker visa program is used across the US by all sorts of companies including giants like Facebook (15% workers are H1B), Google, Microsoft and small startups as well… and it is not that every single company using it is involved in fraud or workers are underpaid…It is those small body shop companies and some outsourcing companies that have historically abused the program.

As of today, nothing changes for the H1B Visa 2018 applicants selected in Lottery, including the current adjudication process. Also, the new measures from USCIS like more H1B Site  visits, report fraud initiatives from earlier this month does not fundamentally change the way H1B petitions are adjudicated, unless if your petition was filed as an entry level 1 programmer with low wage ( you need to check with your attorney on the impact ) and does not qualify for a specialty occupation.

Overall, there will NOT be any immediate impact on the way H1B program works today, including H1B Lottery and how petitions are adjudicated…any proposals that come from agencies will have to go through rule making process or congress and to implement these changes, it will take time…Check out the current H1B Visa Bills Tracker in Congress & Senate

What do you think ? Your thoughts on the Executive Order  ?