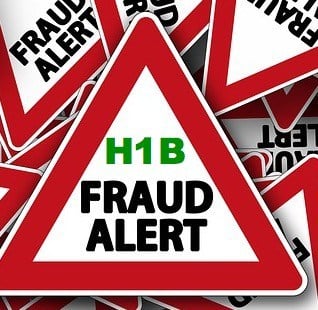 On the day USCIS accepts H1B petitions for next fiscal year 2018, they make below official press release to report and prevent H1B fraud and abuse that work against American workers.  USCIS made few announcements today to combat fraud and abuse in the H-1B Program, below is a summary those announcements.

Summary of the New Measures to Report and Prevent Fraud by USCIS:

1. Report H1B Fraud to USCIS : Creates a dedicated email address for people to report fraud and abuse in H-1B visa program. This can be reported by anyone – American workers and H-1B workers. There was already a way to report to DOL on underpayment of wages using WH-4 form, but this new option gives an access to USCIS as well. Having this is beneficial not only to American workers who think they are being replaced with cheap labour but also to H-1B workers who think their salary is being withheld, or are being underpaid etc. I often come across questions where someone has been duped by their H-1B employer. This would be a good venue for such victims to sought some relief. The article gives good indication on how to detect fraud and what whistleblower protections H-1B visa holder has incase of reporting fraud.

2. More H1B Visa related Site Visits : Expands site visits. Earlier the site visits used to be random, but USCIS now wants it to be more focussed and result oriented. Based on the probability of fraud (H-1B dependent employer, unverified employer information, off-site employment), they would now target those H1B visa employer/workers for site visits. As long as a H-1B worker is performing duties as per the approved LCA and I-129, this should not be an issue. However, this would be an issue if there is a mismatch between submitted documents and actual job. If you think that there is a mismatch its best to get in touch with the employer and/or attorney and fix the discrepancies.

3. New Policy Memorandum for H1B Computer Related Positions : In addition to above, there was a policy memorandum released on Mar 31, 2017. It supersedes and rescinds (cancel/revoke) the previous December 22, 2000 memorandum titled “Guidance memo on H1B computer related positions”. In nutshell, this memorandum clarifies that “Computer Programmer” (especially Level 1) is not a valid specialized occupation. Not everyone would be impacted by this as lot of people file their petitions as Software Engineers. But those who use this category (especially in the case when they don’t have much prior experience, or are paid low entry level salary), this could be an issue. It would be especially bad news for those who are filing in H1B Visa FY 2018 with this job category as this does NOT give them enough time to make any changes. For those already on H-1B with this job category, impact would be felt when a new I-129 is filed – amendments, H-1 cap-exempt (transfer) and H-1 extension etc (at least that’s what I suspect).

Overall View : Pretty big announcements from USCIS and maybe a preview of how some of the loopholes will be plugged in coming months. Although I welcome these changes as they weed out the bad actors from the H1B visa program, it would have been better had USCIS made #3 change much earlier. That would have given time to employers to fix their petitions for upcoming financial year, but now they might be dead man walking (counter argument is that those petitions are being filed for candidates who don’t qualify for specialized occupation and hence giving advance notice doesn’t help). I would be surprised if AILA doesn’t file a lawsuit against #3.

What do you readers this about this? As always please keep the discussion polite and comment on the policy and not individuals.