It is again that time of the year, where it give us an opportunity to analyze and predict the H1B Visa Lottery for FY 2018…unbelievable, this is our 8th year J and we have been successful in predicting H1B trends every year, since our first H1B FY 2011 Predictions.  Our approach to H1B predictions, which started in 2010, has always been driven by analysis of historical data, macro-economic conditions, geopolitical situation and immigration policies.

In the previous years, we used to debate on whether there would be H1B lottery or not, but in the past few years, lottery or random selection is kind of taken for granted, now it is about, how many H1B Petitions can we expect, that’s the big question on the table…As always, we believe in data and current conditions in various aspects. Below are the key factors that will influence the overall H1B filings for this fiscal year.

Let’s look at each of the above aspects in detail to analyze their impact on 2018 H1B lottery numbers.
H1B Cap Reach Dates Trend – Lottery – Historical Data Analysis
It can be taken for granted that we will have lottery. No need to do the guess work anymore. So, we will have lottery for H1B Visa 2018.  Last year was record with highest of 236,000 H1B petitions for FY 2017.The previous years FY 2016 had 233,000, FY 2015 was 172,500. Logically, even if  half of the people, who were not picked in lottery last year file this year, we would have lottery. Below is the prediction portrayed in a nice graph. Also, check out History of H1B Cap reach dates 1999-2018. 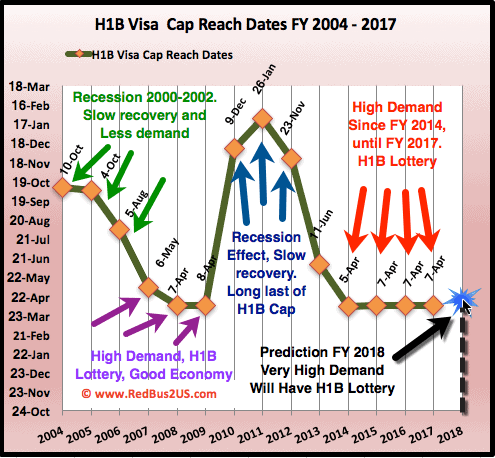 US Economy Performance – Unemployment, GDP Growth :
Before Trump administration took office, some feared that the economy might turn bad due to “America first” agenda and stock market might go down…but nothing happened…on the contrary, everything is doing fantastic from economy perspective and stock market is all time high. The unemployment is all time low at 4.7%  ( lower than last year’s 4.9%) and forecasted to be around that for remainder of the 2017, check below graph. To put things in perspective, the unemployment was about 8% during FY 2014 ad we ended up in H1B Lottery that year. US GDP growth rate is quite decent forecasted to be around 2% for remainder of the year. GDP growth does not look great, but not bad. Overall, the demand for high skilled H1B workers would be high as the unemployment rate is quite low. This adds up to having more H1B petitions filed for FY 2018.

H1B Fee changes of  $4000 fee and Application Fee raise 2016 :   In December 2015, Omnibus Bill passed raised H1B fee by $4000 for certain employers with over 50 employees and 50% of their employers are non-immigrant workers, which is valid till 2025. The fact of life is that, despite the fee increase, it had no impact in FY 2017 H1B season and we had the highest number of H1B petitions filed last year. The only impact of this would be for some Indian MNCs like Wipro, Infosys, TCS, Cognizant, etc., who are in the model of off-shore.   Also, the base filing fee was $325 and it went up to $460 from December 23, 2016.  The fee increase is very meagre and it should not impact the H1B filings.  Overall, the fee increases in 2015 and 2016 will NOT have major impact on the filings. It may slightly reduce the filings from Indian MNCs and IT Body shops that are in offshore model, but should not have any impact from large firms like Microsoft, Google, Facebook, etc. You may check our H1B Sponsors Database to review filings.

New Trump Administration – Geopolitical Issues, Immigration Policies – H1B Impact  :  Since President Trump has taken office, there has been so many rumors, confusions based on leaked memos and H1B 130K wage limit , etc. and media confusing everyone. Overall, Trump administration’s immigration agenda is to protect American Workers Jobs and make sure foreigners are not replacing Americans’ jobs. We have at least 4 H1B Bills introduced in House and Senate , that talk about changing H1B and L1 regulations, but none of them have even passed in either House or Senate. Also, the geopolitical situation with ban for certain nationals, and extra scrutiny for foreigners at US Port of Entry is creating so much chaos in people’s lives and corporate world.  The fact of life is that none of the H1B rules and policies are passed and do not apply for FY 2018. It is safe to say that the speculations may not have any impact on the H1B filings. On the contrary, I expect this uncertainty would increase the H1B petitions because of anticipation of policies like reduction in H1B quota in future and more tighter measures going forward from FY 2019.

New 24 Month OPT Rule, H4 EAD Rule  : The 24 Month STEM OPT Extension rule was effective from May 10, 2016. While this rule may sound great for F1 students by looking at the number “24 months”, the reality is that it is not very lucrative for employers. The amount of overhead the employers have to take for OPT program rules with mentoring and oversight is quite high…This overhead to have someone on OPT for longer period is less attractive for employers and they would rather sponsor H1B for their interested students on OPT…This will account a lot for H1B filings and we expect that it would add about 10% to 15% of the overall H1B filings for FY 2018.  Also, we had H4 Visa EAD rule that became effective from May 2015 and it gave eligibility to about 179,000 H4 visa holders and about 110,000 for 2016 and 2017. Despite these large numbers, still there are good number of H1B spouses who are not eligible for H4 EAD and may try to apply for H1B. It may slightly reduce the filings from previous years, but it will add up to about 5 to 7% in the current FY 2018 filings.

Current F1 Students Graduating, OPT Students :  US has been the destiny for many international students over last couple of decades. The growth was about 7.1% during 2015-16 academic year. A good amount of these students would graduate in 2017 May. But, we also need to also consider students from prior year as well . Overall number of the international students are over 300,000 and over 100,000 students from India alone in Graduate level and OPT. Also, about 46% of these degree holders are from STEM. Most of these students are potentially graduating or looking to work or continue on OPT.  With more overhead for STEM OPT extension, you can expect most of these students would very likely apply for H1B visa. We believe the potential filings from the current students and OPT students is around 20% of the overall H1B numbers.

Summary – Lottery Predictions for H1B visa 2018 Quota :
The key takeaway after reviewing various aspects that influence the number of H1B petitions is that despite new President Trump Administration in US, the overall stats that correspond to economy, current students, OPT holders, H1B lottery missed applicants,  H4 visa holders, etc. do not favor any significant drop in the H1B filings. Indian outsourcing MNCs and IT Body shop consulting companies may file slightly less number of petitions this year, but I feel that the it would have less impact in overall filings. There is tremendous demand for high skilled technical workers with booming economy and low unemployment rate in US…Also, with new Donald Trump administration in office, it is possible that big employers like Microsoft, Google, Facebook in US may file more H1Bs this year as the future of H1B program looks unclear with many speculations and bills around wage increases, quota cap reduction, etc.. Now, the prediction in terms of number of H1B petitions, we do not see any major slowdown in the H1B filings this year and we could anticipate anywhere from 210,000 to 240,000 H1B petitions for FY 2018.