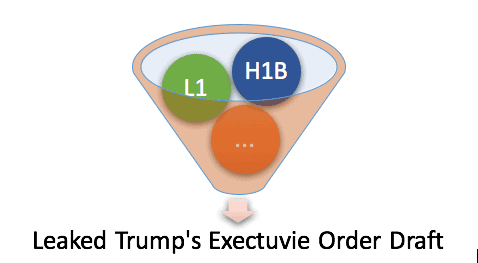 There has been so much confusion and chaos in the lives of many internationals living in US either on Green card or any other visa status with the recent executive order signed by President Trump on temporary ban on internationals from certain countries and certain background. This executive order signed matched word to word on the set of leaked Executive orders that were posted on Vox website on Jan 25th.  Many news agencies picked up on these memos, especially the one that says “Executive Order on Protecting American Jobs and Workers by Strengthening the Integrity of Foreign Worker Visa Programs“ and started to write speculating that new Executive orders are on the way to limit Employment Based Immigration. There are some others speculations based on the bills introduced to tighten H1B and L1 programs. We will try to summarize whats floating around all over news websites and blogs.

To clarify, as of today ( Jan 31st, 2017), nothing has been signed by President Trump. This leaked memo is NOT officially confirmed and NOT Signed. It is pure speculation at this point and written to help our readers be informed on whats happening.

Whats the take away ? What we do not know is that, if the same Executive order draft text will appear or even the Executive order will be passed or changed. Whatever you see all over is pure speculation by news agencies. Also, most of the text is really vague and does not have any specifics on how some of these aspects will work. We will have to wait on the specifics…Also, President Trump’s power is limited with Executive Order option. He cannot just randomly cancel any rule that was legally formulated with rule making process and comment period, etc.

What are your thoughts ?  Any other things that I have missed to speculate 😉
References :

Actual Leaked Executive Order Draft that was published by VOX  :