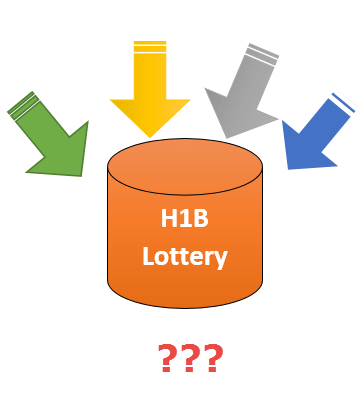 It has been over 7 years since we have been writing regarding the H1B visa predictions…In the previous years, we were wondering, if there would be lottery or not…but, looking at the H1B petitions filing and demand in the past couple of years, now we only wonder “how many h1b petitions will be filed this year and what are my chances in the lottery for H1B Visa 2017 ?”. We are very proud to say that our H1B visa lottery predictions were pretty much accurate all these years. Now comes another USCIS fiscal year and H1B season…Below is our analysis on the H1B lottery prediction for FY 2017.

As always, I believe in data that will impact the H1B lottery situation for FY 2017. I believe that the below factors will greatly influence the number of petitions filed for FY 2017 and in turn the lottery.

Let’s look at each of these factors in a little more detail for our conclusion at the end on the approximate number of petitions we can expect for FY 2017. 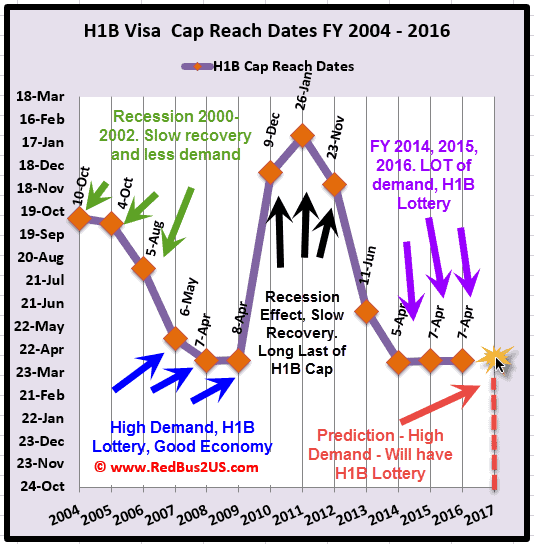 New H1B Fee increase Rule:  As per Omnibus Bill passed, the H1B Fee was increased by $4000 for certain employers with 50 or more employees and 50% of their employees are non-immigrant workers. This fee increase is in effect till 2025 and impacts all the employers falling in that category.  The biggest impact will be for all the Indian outsourcing companies like Wipro, Infosys, Cognizant, TCS, etc. who work in the model of off-shore. We can expect to see some decrease in filings from these companies. USCIS does not publish any data on how may H1Bs were picked from last year for these large outsourcing employers, but as per the LCAs data filed with Department of Labor, we see that a lot of LCA applications were filed last year for FY 2016. We can anticipate some drop in filings by these large employers. This fee increase will NOT really impact any of the small employers, large American firms like Facebook, Google, Microsoft, including some of the IT bodyshops…You may check our H1B Sponsors Database is up-to-date with latest LCAs until FY 2016.

US Economy – GDP Growth, Unemployment Condition:  US economy is doing pretty well on paper, despite the hiccups around the world. The unemployment is at the lowest at 4.9% compared with last year 5.5%, it has even come down. In terms of annual GDP growth rate, it is not growing at the same pace as last year, but still positive and expected to be about 2.1% for this quarter.  To compare with past lottery years, the unemployment rate was about 8% for FY 2014 and we had lottery at that time, now you can see that we are at about 4.9%, which is significantly less…Though the GDP growth is slow, the unemployment rate is significantly less, so it clearly tells that there is high demand for jobs and we can expect more companies to look for highly skilled labor like H1Bs.

International Students graduating/ graduated, OPT holders :  International students studying in US on F1 visa is ever increasing. The international students growth increased by about 10% in 2014-15 year. The primary set of students who will apply for H1B for FY 2017 would be the one who plan to graduate in 2016 or have graduate in 2015 or earlier. As per the graph below, we can see approximately 300,000 Graduate Students and about 100,000 students on OPT, who could very likely pursue H1B this year. Also, you can see the other graph on STEM graduate composition, who would very likely be applying for H1Bs and OPT.  These numbers are staggering and it adds up a lot to this year H1B filings potential.

New 24 Month OPT Extension Rule making Impact : As you know 24 month STEM OPT Extension Rule Making news has been in headlines for many months now and it is at the verge of completion as the process is complete and waiting for the rule to be published in Federal register. The biggest catch in the new rule, despite 24 month OPT period, is the amount of overhead employers have to take for OPT program rules with oversight and mentoring . The amount of time and resources they have to spend on OPT students is an overhead and employers may sponsor H1B ahead of time rather than the overhead for longer period of time. This can add up a lot for potential H1B applications for FY 2017.

Summary of H1B Visa 2017 Lottery Predictions? How many Petitions ?

Now that we have looked at various factors that impact the H1B 2017 season, it is very clear we will very likely have lottery. Based on our analysis, despite the factors like $4000 H1B fee increase, EAD for H4 rules that may impact in less filings, we believe that there will be significant demand for H1B filings this year due to the fundamental growth in international students in US, demand for highly skilled labor in America with less unemployment and also, up until February the OPT Extension rule was in confusion state, so students would have been alert to get their discussions going with their employer and may have planned for their H1Bs as well.  In terms of numbers, we anticipate that there could be anywhere from 230,000  to 250,000 H1B petitions filed for FY 2017 that could be part of the lottery.

Most commonly asked questions around H1B lottery are below

Update : For FY 2017, the Lottery was conducted on April 9th, 2016.
USCIS typically starts accepting applications for next fiscal year from April 1st and in lottery situation they would accept for 5 business days. For FY 2017, they will very likely accept from April 1st to April 7th. Last year, the lottery was conducted on April 13th and the year before it was April 10th.  So, it would definitely be in the week of April 11th.  The date depends on the total number of petitions filed as USCIS has to do basic paperwork to conduct lottery.

How about H1B Visa 2017 Lottery Results Date? When will I know the news and decision ?
Well, unfortunately, it is a waiting game and there is no specific date for getting your results, unless you file the H1B petitions under premium processing. USCIS process petitions and keep sending receipt numbers and reject notices in their own sequence and there is no information on how they prioritize. You can see the results like receipt number and reject notices coming along, but it is the painful waiting game for everyone filed under regular processing. Last year, USCIS did a news alert indicating that they have returned all the rejected petitions on July 14th. So, you can expect the last date for receiving lottery decision around that…depending on the number of petitions filed this year, it may be earlier or even later in July or even early August.. We will have to wait for USCIS news release on lottery for this final date.

NOTE : The above article was for FY 2017 Quota. For current year, You should read  H1B Lottery Predictions for FY 2018 – Analysis

How may petition is your guess? Share your thoughts and insights.