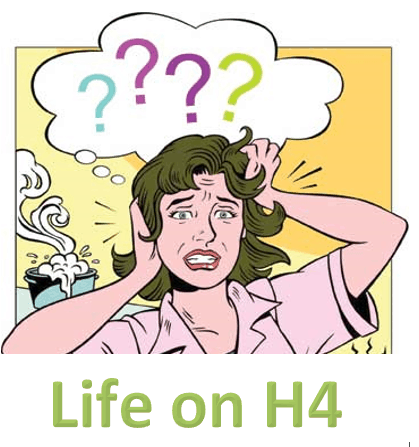 One of our readers, H4_Life ( anonymous name), has shared her thoughts of living on H4 Visa in USA. It is very inspiring for anyone to live with positive hope and attitude towards life. Thanks to H4_Life for sharing her experience with us. You can share your experience here

When I first got the news that I would be travelling to U.S after the wedding, I was kind of excited but mostly blank because I didn’t know what to expect. Back in India, the idea of living in U.S has always been considered a golden chance. So yes, all those talks did add to the excitement.

But the fact that I would be living with my boyfriend in U.S after marriage let me think that I was probably going to be in the best place in the world and I instantly put down my papers.

My Parents on H4 Visa – Not allowed to Work

When the wedding neared, my parents stumbled upon a few news articles that spoke about the lives on women and men who travelled on H4 and why they consider it to be a curse. It described about the loneliness and the dark times a person faces when they live on H4 because you are strictly not allowed to work on a dependent visa, yeah blame the rules.

Even as I cramped my stuff into two large bags, I kind of wondered if life can get that worse like how some people described.

For a while, I chose to ignore the warnings and look forward to the marital bliss of marriage. The first few weeks were difficult as I learnt to accustom myself with the new surroundings and keep myself busy while my husband was away at work. As the weeks rolled into months, there would be a sense of a dark depression looming over which was temporary to my relief.

There were lot of Indian friends around which made the stay a lot easier. Yet, people have their own lives to live and are not always there for us. It was fine for a while but the feeling of being wasted always crept into my head. There were times when I wondered if I did the right thing by quitting a lucrative career. But I would look at my husband and remind myself that it was all worth it.

Despite the self-motivation talks, I found myself slipping into depression every now and then when I thought about the future. There were a few women around like me, but most of them on H4 had children so their lives were just the busiest. Probably, the natural desire to compare India with U.S keeps tugging at our minds. I increasingly began to feel that India was a lot better in many ways.

Next Few months on H4 Visa

Seven months later, I became familiar with the place and people. I made a lot of Indian friends around which helped me a lot. I spent a lot of time reading books and stuff online. I kept myself busy learning to cook for my husband. As I waited for the next big thing in life to happen.

My thoughts Marriage Decision – H4 Visa
It’s true that life on H4 can be miserable and probably is. But remember that nobody forced us to leave our jobs and get married. And no matter what you do or blame the rules, there is nothing you can do to change it. I discovered that though my life was miserable at times, I learnt to be grateful for the things that I had. I learnt to look at the positive things in life.

Gratefully, with a loving partner and God’s blessing, I was able to apply for my H1 visa after a year of anxiety (getting a H4 to H1 is another battle which you should be prepared for if you happen to apply a H1).

Yet, I agree life isn’t easy out here living on an H4 but let’s try to help each other by making the most of it. Sometimes, you are put into long lulls of nothingness for a reason which becomes clear after a while. Just hang on there and see the good things of life.

What are your experiences on H4 Visa ?  How do you feel ?