The litigation on H4 EAD has been going on for a very long time as you can see full details at article History of H4 EAD Lawsuit and Timeline.  DHS’s brief was due on April 1st, and they complied with the date by filing their brief late last night at 10:46 PM. It is a 49 page document submitted to the court supporting their argument. Let’s review the key points in the brief filed by DHS.

Summary of Argument Presented by DHS against Save Jobs in Brief :

DHS argues that the Appeals Court should confirm the judgment given by District Court regarding the H4 EAD Rule. They highlight that appeals court has three key issues to review as part of this brief.

DHS argues that Save Jobs lacked evidence to challenge the H4 EAD case based on the below details. 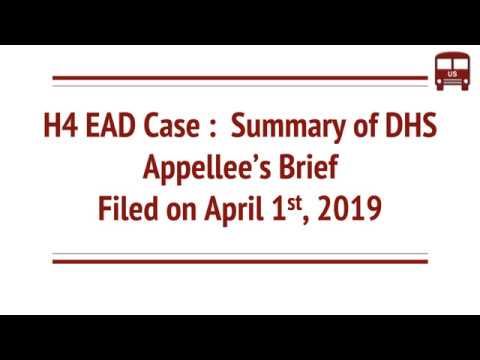 DHS argues that district court did the right thing by not considering the post dated evidence, because in litigation additional evidence can be produced but the materials with post date of the complaint cannot be used to establish the case. Basically, you cannot file a complaint based on future evidence. DHS argues that the evidence in Appendix submitted by Save Jobs USA was all postdated and district court could not find that they would establish any harm to Save Jobs USA members directly as there was no concrete proof and also it was post dated.

Court Should NOT address Save Jobs Statutory Authority:

DHS argues as a general rule the federal appellate court does not consider an issue that is not passed from below court. In this context, the key point on the authority of DHS to issue H4 EAD rule as it was not fully considered in the district court. DHS argues that appeals court should only consider the facts established and decision given in the District court and should NOT go any farther than that. Basically, the argument that Save Jobs USA presented in appeals court brief earlier says that “DHS lacked authority to issue H4 EAD”, but it was never raised in the district court, so the current Appeals court cannot address that argument now as it is a different point to consider. If appeals court believes that Save Jobs has standing, then they need to send the case back to District Court, where Save Jobs USA can again raise their argument that DHS lacked authority and then proceed further.

Overall they argue that Save Jobs USA lacks standing to challenge the rule as their claims are based “overly speculative” aspects and facts established by them were filed after the case was filed and also no evidence for direct impact for the filing parties in Save Jobs USA. DHS seeks appeals court to uphold the decision from district court and if required, send it back to the district court to argue on the DHS lack of authority to issue H4 EAD.  DHS standing on the H4 EAD rule removal does not change in this brief and they clearly update court regarding the current rulemaking process that it is with OMB and it will be published soon as per the process. You can check out H4 EAD Rule Removal Predictions by Rule Making Process

You can check out our H4 EAD Lawsuit Court Documents History for reviewing the actual document.

What do you think ? Your thoughts on this litigation and brief  ?