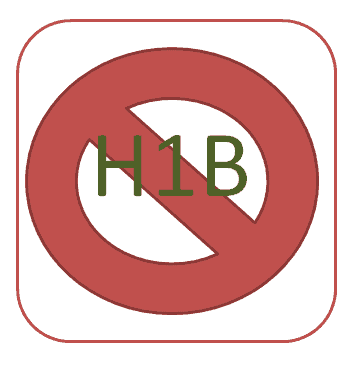 With USCIS official press release, all prospective H1B applicant for fiscal year( FY) 2013 are eagerly waiting for their petitions to be filed. If you have not, check out the H1B visa 2013 lottery prediction article, it has some insights with past date. Anyways, National foundation for American Policy (NFAP), which is a non-profit organization, that focuses on public policy research on trade, immigration, education, and other issues of national importance, has released a research study recently in February 2012 on USCIS’s H1B and L1  Visa rejection/ denial rates.   They have considered all the H1B and L1 Visa data from USCIS from 2003 to 2011 and performed data analysis. Check out some excerpts below. All the data below is from petitions filed with USCIS and does not reflect decisions made at consular posts. 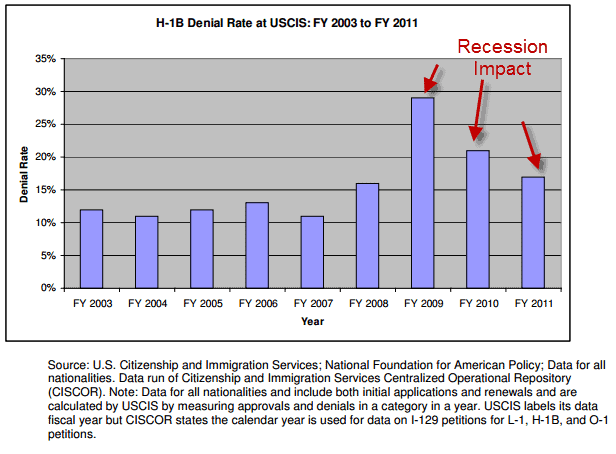 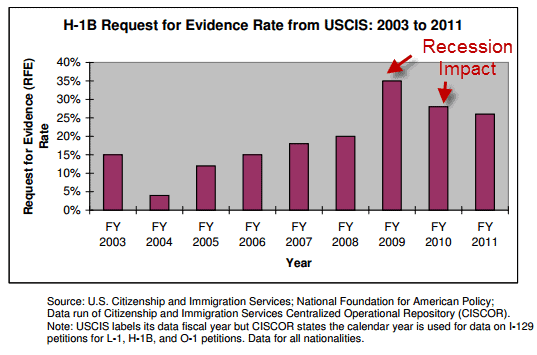 Reasons for high H1B Visa Rejections and RFEs in last 3 years ?
In my view, the primary reason for the high rejection rates and RFEs in FY 2009, 2010 and 2011 can be attributed to the US economy recession and high unemployment rates in America.   Moreover, the H1B visa rules changed with the neufeld memo increasing guidelines and employee-employer relationship clauses, which caused the spike of RFEs to meet the new rules.

Predictions for H1B rejection rate and RFEs for fiscal year 2013 ?
We can clearly see the trend of increasing H1B rejections by USCIS in FY 2008 and 2009 due to peak recession period around that years. Unlike, in FY 2010 and 2011 with US economy slowly recovering, the H1B rejection rates are decreasing, including decrease in US unemployment rate.  My speculation is that as US economy is doing ok and the unemployment rate in US is also decreasing, for H1B visas FY 2013, the rejection rates will be pretty similar or even less compared to FY 2011 and 2012.

What are your thoughts on H1B visa rejection rates for fiscal year 2013 ?