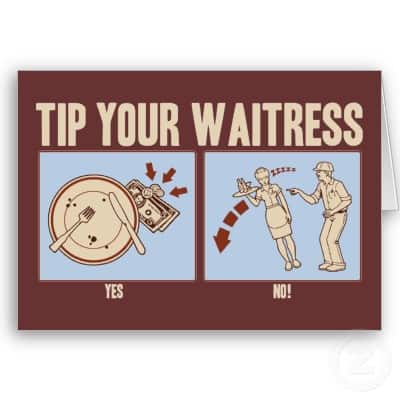 I have so many American friends who work at restaurants just to pay bills or because they are in school and could not find an internship or part time job on campus.  As internationals, especially from Asian countries, some of you may not be used to the concept of tipping (leaving certain percent of money of your check or bill)  waitress in restaurants. It is very different in America. You have to tip at least 15% in restaurants; it is very bad on your part if you do not tip waitress less than 15% for even normal service. Let me share the reasons and logic for tipping in America.

How much does waitresses make per hour in Restaurants in US ?

Many of you might not know the truth how much exactly waitress make in restaurants in US…it might be shocking to know the facts (at least that’s how I felt ). In US, the federal minimum wage for waitress (tipped) is just $2.13 (two dollars 13 cents).  In states like Wisconsin, Wyoming, New Mexico, New Jersey, etc, the minimum wage for waitress is just  $2.33 per hour. Because they are tipped employees, if no customers show up, they do not make any money.  Of course, it varies by state, in some of the west coast states like California,  they have mandatory minimum wages of $10. Check this Department of Labor Minimum wage site, that has listing of minimum wage by state.  Majority of the income waitress make is from the tips that customers pay or leave on their table.

Why should you tip at least 15% for waitress in US?

As you have just read above, how much waitresses make, you should tip a certain minimum so that the waitress can make a living. The normal standard or practice for tipping waitress is about 15% for normal service and around 20% for very good service.  Just to clarify by example, if you spend $100 USD on food, you should at least tip $15 or more.  Just do not give a common tip like $5 for whatever you bill for food. Please do NOT be stingy or try to act cheap at restaurants by NOT tipping properly. Most the waitresses are either students who are in school or someone who could not find a job. You do not want to hurt them and get bad karma. If the service is bad, people tend to tip around 10% and tell openly that they did not like the service. If you tip like 10% it means that you did not like the service and directly stating that by tipping less. Also, you can check the bill, some big restaurants include certain percentage like 12% to 15% as service charge, if they already have it,  then no need to include any tip., but you can still leave some tip for them..

Do NOT tip less and create wrong impression about your people from your country, race or religion.

Waitress think people from certain countries or of certain religion tip less, they just stereotype.  In all honesty, you do not want to create that bad impression about people from your country or race. Many people do not tip properly just because they do NOT know the truth how much waitress make and the culture of tipping in US. If a friend of you do not tip properly, just tell him the truth and teach proper tipping standards.

What is your experience on tipping waitress ? Did you tip properly ? or not ? share your thoughts.