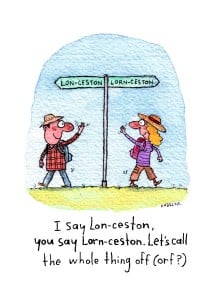 International students and professionals are often tempted to speak in their mother tongue or their local language whenever they find someone from the same country or place. It is a very bad practice and can have bad implications. Here are few thoughts shared by our guest author.

We have something called as our ‘mother tongue’, which serves as our ‘first language’ – that’s the language we are most comfortable in and use to speak widely. Hence, in a foreign country, it is only natural that when we meet someone who speaks our same first language, we are tempted to converse with him/her in the same language.

Many Indians, when in the US, speak with each other in Hindi, Tamil, Telugu, Bengali, Gujarati, Marathi, Punjabi and a whole bunch of other languages, besides English.  Other Asian students converse in Chinese (Mandarin), Japanese and other oriental languages. Students from Latin countries speak in Spanish or Portuguese.   However, speaking in a language other than English (in the United States) in a public setting where the group is a mixed bag might not be a good idea, for many reasons.

Americans love to get involved and be a part of random conversations. Any American or international student/co-worker, for that matter, would love to be a part of your conversation, unless you are keeping it private. Everyone loves to talk and mingle. Whether you are discussing sports, politics, entertainment, studies or just anything random, it is obvious that other people will want to get involved. But if you converse in a language other than English, how do you expect them to be a part of it? This is considered rude and not encouraged. Even if you are in company of other students from your home country, but who do not speak your language, how do you expect them to understand what you are saying? Think about this: Would you like to be stuck in a group where everyone else speaks a language you do not and hence, you end up bored and frustrated?

How you can be misunderstood and create negative image of yourself?

When you speak in a foreign language, it is natural for others to feel that you are speaking in a language alien to them because you want to bad-mouth them!  This might not be what your intentions are, but you cannot blame others for believing so.  Worse, some words from your language might have a completely different meaning in some other language! When others hear and understand bits and pieces of your talk, they might construct a completely different story – something you are not talking about! Half-knowledge is more dangerous and harmful. You might be the cause for misunderstandings.

It is not a good idea to assume and expect others to know your language or expect them to learn it. They are here for learning engineering, math, science, arts, business and other topics (probably not your language). You might be multi-lingual. Congratulations! Pat yourself on the back! … But don’t expect others to be as linguistically gifted as you!  Just be considerate of others.  Such behavior leads to communication gaps and others might distance themselves from you. You might lose good friends, just because of your boorish attitude.

Hence, it is necessary to speak in English or any other common language when there is even one person who does not understand your language. When in doubt, just stick to English – you cannot go wrong with this! It might not come naturally to you, but you have to try and get used to it. It might happen that you speak in English but others continue the conversation in some other language. Try and divert the conversation back to English. If they still do not continue in English, mention that there is someone else in your group who might not understand what they are saying. Likewise, avoid regional, national, racial topics when in public. You never know when you may offend others!

About Guest Author: DD completed MS from a university in the Northeast region of United States and currently works at  a financial firm in New York City.