Biden administration has sent a Fact Sheet / Bill called “US Citizenship Act of 2021” to Congress on day one to address many of the pressing immigration issues. This is NOT the Official Bill release by Congress, rather a collection of topics that are priority for Biden Administration.

The Bill sent by WhiteHouse to Congress covers a broad range of immigration areas, but in interest of our blog readers, we will focus on areas of H1B Visa, H4 EAD, Green Card per country caps, age out of kids, other relevant topics.  Let’s dive in.

On Feb 18th, 2021, Official Bill was introduced in Congress that has many aspects discussed in this article. This Official Bill is based on Biden immigration plan that was sent by them on Day 1 in their office. Read Summary of Official Bill – US Citizenship Act of 2021

Before we jump in, I want to make sure, you all understand the reality and take whatever you read with a pinch of salt. Read the below note.

Important Note: This is only a bill (document) that is sent to Congress by Biden Administration. It is not an Official US Congress Bill yet. There is no number yet. It has a long way to go. It needs to be introduced in House, Senate, go through all the Steps of How a Bill becomes Law in US. What you see below is a big wish list of items from Administration, but many of them may or may not make it in the final congress bill or many changes may come in. So, think of these a laundry list of all wishes by current administration.

Biden Administration focused on Immigration a lot in their presidential campaign and promised a lot on what they would deliver once they take office. As per their promise, on day one, they have sent a big Bill (document) with a lot of items related to immigration that includes their campaign promises on changes to US immigration system.  Below are the broad areas in the Bill that was sent to US Congress.

Now that we have an overall idea on the background and what all topics it covers, let focus on areas relevant to our readers.

Below are the various topics related to the employment based green cards and the asks in the Bill for the same.

You may watch the below YouTube Video as well on this topic. 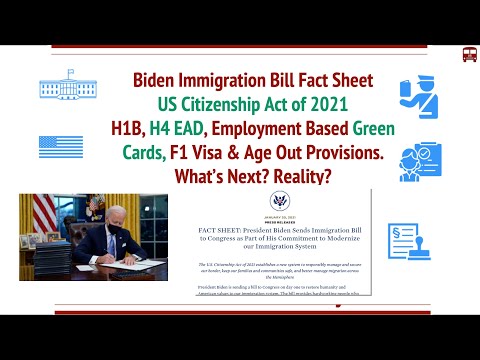 Below are the topics that are relevant to the H1B work visa holders.

Currently, the Employment authorization(EAD) for H4 spouses, who are dependents of H1B holders, is not part of any Congress legislation. It was introduced by DHS during Obama administration. Due to DHS regulation and no US Congress backing, there have been lawsuits on H4 EAD that are dragged for over 5 years.  The administration goal is to make sure the work authorization for H4 Visa holders becomes part of Congress legislation, so that it cannot be challenged in court.  Also, currently, the EAD is only for spouses and does not include children. This bill asks EAD for dependent children as well.

Prevent Children from aging out

Currently, when dependent children apply for green card as a child and if they turn 21 before their green card is approved, they are no longer categorized as a child for green card issuance.  This situation is called “aging out”. This is a huge problem for many dependent kids. The Bill asks to prevent children from “aging out”. Though there is Child Status Protection Act (CSPA), it does not do enough to protect everyone. Essentially, they are asking for mechanism to either lock-in the age of children for Green Card eligibility or give other provisions, so that children do not age out. Again, the details will have to be sorted out by the congress.

The goal of the bill is to retain US Universities Graduates in Science, Technology, Engineering, Mathematics(STEM) areas in US and not leave to other countries. It calls for provisions to make it easier for US Universities graduates with advanced STEM degrees to stay in the country. They say advanced degree, so it could include PhD or maybe even Masters. We do not have any specifics at this point on what needs to be done. It is up to Congress on how they would interpret this and give options to retain US graduates with advanced degrees in STEM categories.

It talks about a program to improved regional economic development.  In other countries there are programs that are geared towards development of regions that are not developed as metros.  It is likely around that, there are no specifics on this. We need to see what congress comes up with.

As you have read, many of these are really big changes and have not been able to get bipartisan support in the past. Now that democrats control both House and Senate, they have far more better chance to pass some of these, if not everything. We need to wait and see, what really comes out after this bill reaches Congress. We will keep you all posted.

What do you think of the Bill Text and priorities by Biden? How many would make it ?

Below is the actual Biden Bill text that was sent to Congress. It is not available on the Whitehouse.gov due to some redirect issue.