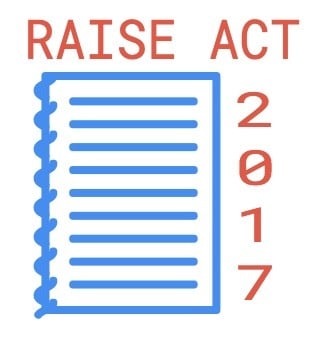 This week has been crazy with some heated discussion in blogosphere and news with the announcement of Reforming American Immigration for a Strong Economy( RAISE) Act by Senators Tom Cotton and David Perdue. There is so much of info around that is vague and misleading many. We will summarize and talk about what it means to various work visa holders like H1B, L1.

Update : Trump has announced in May 2019, Merit based Green Card and New Immigration System , which is pretty similar to below, but with funding for wall and some minor changes.

What is the current status of RAISE ACT  ?
The status is that, it is not even introduced officially in Senate and we only see that its previous version is in House and was read twice and referred to Judiciary committee. So, it has to pass Senate, Pass House and then only it becomes law. Really a long way to go and with the current state, it is very unlikely that it will go through. There are many such H1B and Immigration Bills by Trump team with little progress. So, nothing to worry or panic folks !

What is the impact for H1B and L1 visa holders or Work Visa Holders ?
The RAISE Act Draft version does not really explicitly talk about H1B, L1 visa or any work visa holders.  So, we do not know what the impact would be. For now, as per current process, anyone on H1B goes through the standard Employment Based immigration process…But, if the RAISE Act becomes a law, this will change the process for Green Cards for H1B holders and they will need to go through the points based system. The concept of priority date, wait times will be gone…Younger and more educated people with higher salaries get more points…so, it can have a potentially drastic impact, if it becomes law…but, too early to predict anything…for now, it is pure speculation. We should just wait for the next steps….It has to be passed as it is in Senate and house, which is very unlikely…

What is your view on this RAISE Act ? Is it bad for US ? Good ? What do you say ? Share your thoughts…