Skip to content
Home » Living in US » Personal Finance » Taxes in US as Foreigner – Classification of Aliens, Filing Status 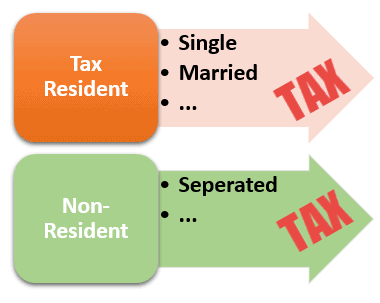 In our previous article on taxes, we discussed on how not filing taxes and returns can be evil and many FAQs on Filing Taxes as International. In this article, we will discuss more around how foreigners are classified for tax purposes and what the filing status would be and some benefits around same, including forms that you would use.

For tax purposes those who are not a U.S. citizen or U.S. National are regarded as Aliens. Don’t think of the description of term Aliens in sci-fi movies ;), this is just the terminology in taxation.  Anyways, in context of foreigners, someone living on a Visa in America are considered Aliens for tax purposes. Also to clarify, US citizen is someone born in US or get citizenship by virtue of their parents citizenship. Unlike, US National are someone born certain islands like American Samoa are treated as US Nationals. Read US Citizen vs US National. There are in general two type of aliens: Resident and Non-resident Aliens.

As an International, How would I know which form I need to file for Taxes ?

What would my filling status as Visa Holder for tax purposes – Married, Unmarried?

Your filing status is used to determine your filing requirements, standard deduction, and eligibility for certain credits, and your correct tax. This generally makes great difference in one’s tax bill.  In general, you can divide the filing statuses into 2 categories: married and unmarried.

(Head of Household:  The Head of Household status generally applies if you are not married and have paid more than half the cost of maintaining a home for yourself and a qualifying person)
Example: Standard deduction for tax year 2015 for residents

Clearly if you and your spouse file as Married Filing Jointly, your standard deduction may be higher, lower tax bracket and may qualify for other tax benefits that do not apply to the other filing statuses. This may lower your tax than other filing status.

Non-resident aliens and dual-status aliens are not allowed to claim the standard deduction and must itemize in order to claim tax deductions.

In the next article, we will cover details on filing taxes as family for H4 visa holders, Dependent Children.

Any other thoughts to add on tax classification and status ?