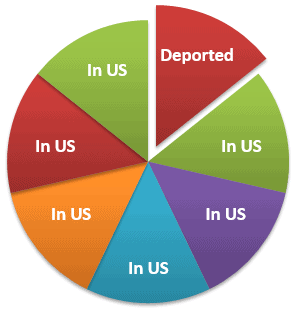 About 14 students left Hyderabad, India to America few days ago on their journey to pursue their higher education dreams in US…after a long flight, they were interrogated for over 14 hours at the port of entry in US…and finally deported to India…the only thing that is common for all these students is that they were part of two universities, which are Silicon Valley University, San Jose, CA and Northwestern Polytechnic University, Fremont, CA.. It is all over the news in prominent Indian newspapers and TV channels. Apparently, everyone has a different perspective, University says something, students say something else, and airline says something else…Below is a quick summary of the info and our analysis from various sources for you to judge what the reality is? Also, we are posting updates as we hear more. check below for the latest news.

Detail summary and links to official news article are captured as part of a dedicated page for this news.

What’s the Reality – Here is a quick check of Facts

If you read the above perspectives, each of them have their own say and some are completely contradictory…Let’s look at the facts.

Firstly, as you can see, below is the exact image from one of the deported student’s visa page, captured from TV news clip. What it clearly tells is that their visa was revoked under 22 CFR 41.122 (e) 3.  As per the law, it falls under the “Revocation of visa by immigration officer”, where the immigration officer can cancel the visa by writing revoked on top of the visa and the e(3) parts signifies that it is falls under the “ final order of deportation or removal or voluntary departure”.

Also, the second part is that the officer would write on back of the passport indicating the reason for deporting, we could not get that part clearly, this was shown on news, I have my own doubts as the date is wrong…anyways, it could be very likely 212(a)(7)(A)(i)(I), which means that the officer feels that they are potential imm

igrants and do not have proper documents backing their claims, etc.  Usually they are given I-867A forms with the incident details. Another source tells that that they did not answer questions properly when asked about school and themselves in inspection and they seem potential immigrants.


What’s the Universities’ Status : As per our initial research, we could find that the schools are SEVP certified to issue I-20s for F1 Visa, you may check  SVU SEVP  and  NPU SEVP  and there was no federal raid like in Tri Valley State University Case that impact 1,555 Students in 2011 . The universities as of today do not seem to be blacklisted by any agency publicly.  The universities authorities have posted publicly on their websites that the students should carry all the documents and be prepared for extra screening with the recent Paris attacks.   The Universities say that the students could NOT answer basic questions at interrogation and that’s why they were deported as per the discretion of the CBP officer. Also, as per latest Times of India article published today Indians flock US Education Warehouses , there are about 1,500 to 3000 students in SVU and at least 70% Indians, the campus is pretty much like a warehouse and very shady, despite the valid credentials it has on paper…something to think about…

Why did Air India say that they are Black listed?  Well, our guess is that there was some speculation and miscommunication here by Air India’s internal operations. As many of those deported took Air India and most of them were from NPU and SVU, I guess they made speculation themselves internally not to carry students from those schools until they have clarity. This message was not communicated well and the black listed word came out due to miscommunication.

What are the actual questions asked by CBP  ?

Below are snapshots of about 4 pages that were leaked to public domain by current students/ school/ press. It is very clear the level of answers that one has given…they have no idea on the fees, living cost, what is even a credit hour and how much does it cost for that…it is sad to see such answers from a student trying to pursue MS in US. It is important to be prepared well, even if you worked with an agency for admission. 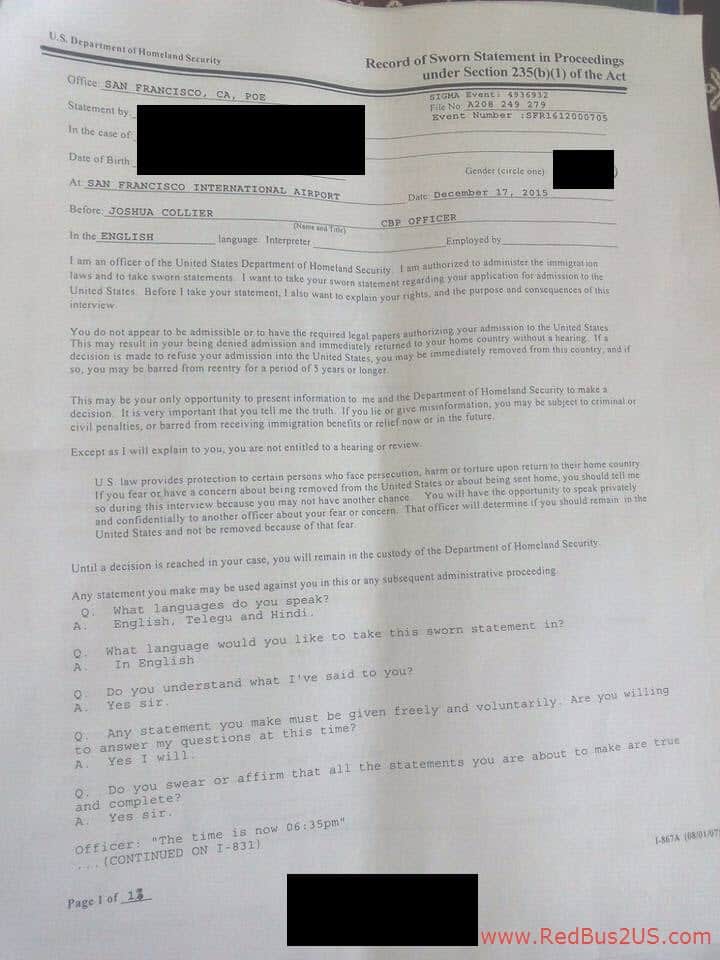 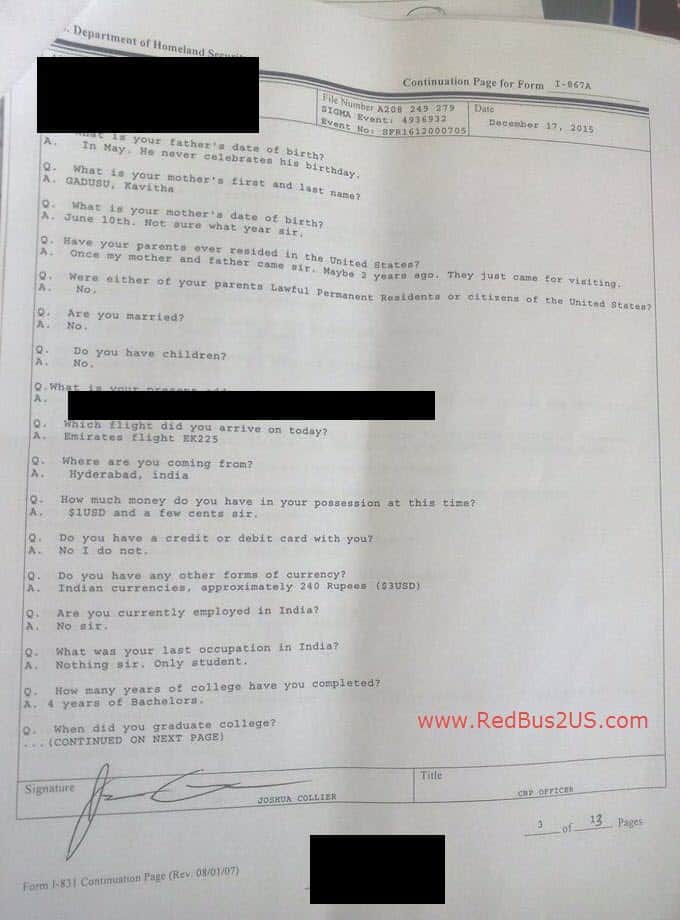 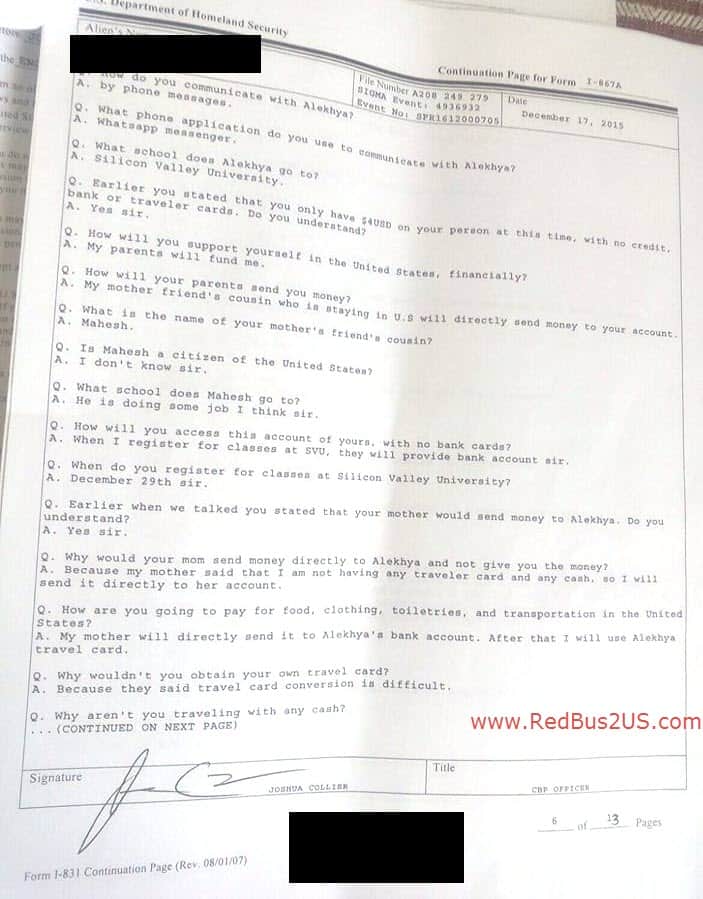 Overall, based on our high level research on schools and their status, the universities did not had any public raid like Tri Valley University and they seem to be SEVP compliant for F1 visa. All the confusion was because of the Air India’s miscommunication between their teams…Also, there is no official information on any of the US Gov. Websites indicating that they are black listed.  It seems to us that the students at the Port of Entry could not convince the CBP inspector with their answers and that’s why they were deported, the above snapshots clearly indicate that, at least one of the students, could not even answer basic questions and it does not help the situation…  In fact, this is a pretty standard process at port of entry and does not get much attention as the percentage of students or any others getting deported are fractional…with Air India and the large pool of students that were deported, this came to lime light.  It is very unfortunate that students could not answer properly at the CBP secondary inspection…We recommend you be prepared well to answer questions at Port of entry.

What can you do to avoid issues at Port of entry ?

As a student you should be familiar with your school, your program, your fee, many other basic things regarding your education in US. Many of the students work with Visa Consulting agencies and have less knowledge about their schools and the program, etc.  Make sure you spend time to learn about your program, school and other info so that you can answer at Port of Entry.  Usually, it is pretty straightforward, but if you are taken to secondary inspection, then is when it gets tricky…so be prepared. As an example, here is a H1B Port of Entry experience…Unlike for H1B,  for F1 students, it will be completely focused on your school, about you and your program…

Would love to hear from you all.  If you are a current student or any one in such situation, add your thoughts or write to us at [email protected] .