Many of you are aware of the past issues from fake universities such as Trivalley State University, University of  Northern New Jersey that impacted many hundreds of F1 students. On the same lines, earlier today ICE arrested many F1 foreign students in multiple cities, who all were attending a fake school created by federal agents called “University of Farmington”, which is based out of Michigan. Below is the news summary. This is developing news and we will update as we have more info. 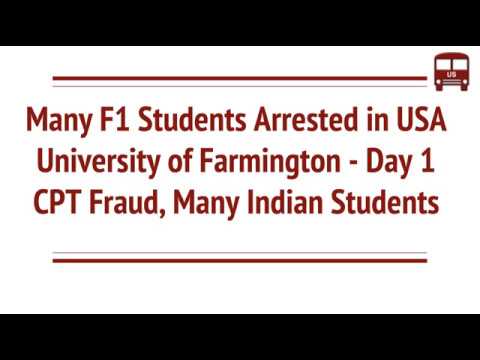 What is the impact for F1 Students doing Day 1 CPT at University of Farmington ?

Unlike degree mills, the fundamental issue with University of Farmington school is that, it is fully fake and there were no classes. In the past, when University was committing fraud by giving day 1 CPT, but conducting classes to shell out degree as degree mill, there were options given to students to transfer, etc…but with University of Farmington, it is a totally different case…The onus is on the students as well as there were no classes attended. The students were doing wrong by not going to classes…so the outcome for these students would not be good and they would go through removal proceedings and very likely be deported.

What should I do, if I am a Day 1 CPT Student at University of Farmington ?

Firstly, you need to speak to an immigration attorney and take swift action to leave country.  The  F1 Unlawful Status Memo that was effective from August 9th, 2018 for counting accrual of unlawful presence will touch 180 days on Feb 5, 2019. If you hit 180 days of unlawful presence, then you are subject to a 3-year bar to enter US and cannot enter America in any visa for 3 years. So, you should plan to leave the country as soon as you can, by talking to a qualified immigration attorney.

Overall, never pursue anything that is illegal as a student or professional in US, it can have very bad implications for your future in US. In current context, to clarify, not all CPTs are bad, they are bad, only if you see some or all of the below red flags.

What are the Red Flags for Day 1 CPT Programs offered by Schools to Classify as Fraud ?

Above are some of the fraud indicators, you need to visit the school, attend classes and ensure everything is correct. If something is too good to be true, then it is not true…so do not fall in trap and engage in such things….below are references to news articles and tweets.

ALERT: A federal spokesman just told me dozens of students from the fake University of Farmington have been arrested on immigration violation charges during a nationwide sweep. The students face possible deportation https://t.co/ooG7QoHcO5 via @detroitnews

The Michigan university federal agents used in immigration crackdown had an office building and a web site but was otherwise a complete fiction pic.twitter.com/mm6rgQng3R