As many of you know, the H1B Prevailing Wage levels were dramatically increased for H1B workers in recent wage protections regulation that was published in federal register.  There was a lawsuit filed today on the new regulation. In this article we will discuss the background on why and details of the lawsuit that we have as of now. Also, we have update the court judgement on the same.

On December 3rd, 2020, there was a judgment given by the court that DOL lost the case and request granted by IT Serve to stop implementing the rule was granted. See below Court order Screenshot. Based on this Court Order, US Dept of Labor issued Official Announcement stating that they are cancelling the implementation of the H1B Wage Levels Change Rule. For complete information, read DOL Update – Cancel the H1B, PERM Wage Levels Change Rule.

If you are not familiar with the H1B and PERM wage level changes, read all the details and impact at article : New H1B, PERM prevailing wage levels, huge impact

This wage level changes has a significant impact for many of the H1B employers, it can impact up to 400K H1B employees based on as per FY2019 stats published on H1BGrader. See below screenshot.

This wage level changes has significant impact on the IT outsourcing companies. ITServe Alliance Inc, that represents majority of the IT Services, Staffing and Consulting Companies has filed lawsuit in New Jersey Court today Oct 16, 2020 challenging the wage level changes.  Earlier this year, they won against USCIS on the H1B Employer Employee Relationship, Itinerary Case that ended up in settlement with USCIS scraping some of the decade old policies.   Also, there are few other associations planning to file lawsuits on these changes.

Now that you have some background on why, let’s dive into the details.

H1B, PERM Wage Levels Lawsuit Details – Who, Where, What

Below are the high level court case details as they appear on Court Cases Website for your reference.

Impact of the New Wage Levels on ITServe’s Companies

The lawsuit goes into detail on the impact to ITServe’s members. They say that many of the IT Services contracts with clients or customers are multi-year and the pricing used for that is based on the wage assumptions of current H1B workers. If DOL randomly does wage level changes, without giving proper notice and option to hear from us, it will impact our businesses. We will be forced to do layoffs, move jobs to outside of US and it will have negative impact on the economy.  Below are the list of companies and the impact due to wage level changes.

Check below screenshot from the court case document that talks about the harm to ITServe members.

You may watch the below YouTube Video as well on this topic. 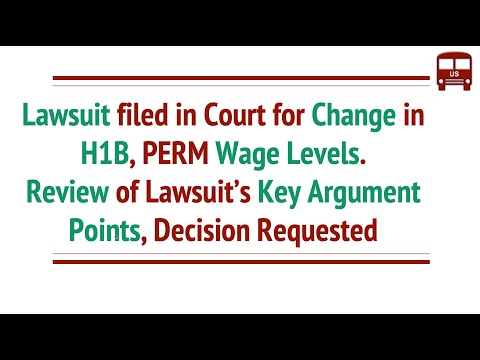 The plaintiffs(ITServe & Others) broadly put in their arguments under the below three areas (called as counts in legal term).  Below are the details and key points from those three areas.

Count 1 – Violation of Notice and Comment Process for Rulemaking

US Dept of Labor(DOL) did not give enough notice for plaintiffs and changed the H1B, PERM Wage Levels dramatically.

Count 3 – DOL Action is Random and not based on Logic

DOL action is totally random and not based on sound logic or justification. In legal terms, they call DOL action as “arbitrary and capricious”.

You can check the copy of the case document at the end of article.

Decision requested to Court in Lawsuit

ITServe is asking the court for giving preliminary injunction and also permanently stop DOL from implementing the New Wage Levels Rule. The reason they say is many things done by DOL in the interim final rule of H1B Wage Levels in unlawful, not meeting the statute requirements, and it was done randomly without proper reasoning and not considering real reports on H1B Data.

The argument points raised in the lawsuit are really strong and DOL may have a hard time justifying the reason for implementing the rule without proper comment. The harm to many business is also something court would weigh in heavily for making the decision. As per Wasden & Banias law firm, “the regulation that was published in federal register without proper rulemaking process has many procedural defects and confident that they would get injunction for the same”.  They are also planning for a lawsuit to challenge the New H1B Rule with Definition change, 1 year approvals, others.

What do you think of the lawsuit ? Do you think Court will give injunction order to halt this rule ? Share your thoughts in comments.