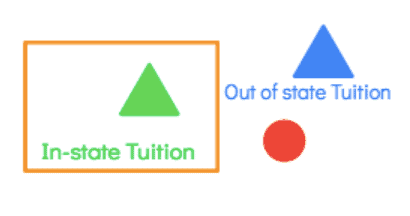 What is Out of State Tuition or International Student Tuition Fee ?

As the name says, it is tuition fee that you pay if you are NOT from that US State. i.e., if you go to school in  Texas and you are not from Texas, you have to pay Out of state tuition. So, all the international students on F1 visa fall under this category as they do not belong to any of the state in the US. Typically the out of state tuition is more or less double than the in-state tuition. For instance, if your in-state fee was $3,000, then the out-of-state tuition would be $6,000 or so.

What is In-State Tuition Fee in US ?

Well, the word says, it is the tuition fee you pay if you are “in” the sate, which technically means you are from the state or have lived in the state or your parents are from that state. In-state tution is always cheaper than the out-of-state tuition. The reason is that, as the residents of the State, they pay taxes and University education is subsidised in public universities for the residents. Bottom line, your taxes you pay are doing the trick here and getting you a big saving on Tuition. In fact, the State Budget has allocation for all the State Schools.  Thats where the money is coming for schools to give you in-state. We will look at the requirements later in the article.

In-state tuition fee eligibility for a student is based on the residency requirements that are set by State. It is not based on US citizenship, but rather based on your residency status in that state and if you have paid taxes. Even, if you are a US citizen and born in a state, but have not lived there and paid taxes, you may not be eligible for in-state tuition.

So, logically, if you meet the residency requirements and taxation, then you will eligible for in-state tuition. It is no different for work visa holders like H1B, L1 or their dependents on H4 or L2. Most of the Public Universities in US consider an individual or their dependents for in-state tuition, if they physically live, work and pay taxes in that state for one year.

For example, you can check Univ of California, Berkeley Residency Requirements and Visa Categories Eligible for in-state to see how they look and qualify someone.

Usually, you need to submit proof to the University that you have established residency requirements of the state. Also, most of the states need that you need to be continuously living in that state for the previous one year to be eligible for in-state. Any documents that can help show that you lived in that state continuously and paid taxes will be helpful. Below are some of the common documents that you can typically submit

Other proofs that may be used

All of these are to verify that you meet the residency requirement.

Read this article  : H4 Visa Study MS/ MBA in US: In-state Tuition and other advantages?.  The best way to check is to email or call any of the state schools that you plan to study in and ask them the residency requirements for in-state tuition, they will ask you some details or ask you to fill out a form and they will tell based on that. Again, you need to check with the school to ensure you qualify, you cannot assume this as it all varies by state.

In general, F1 visa students are considered full time international students and do not qualify for in-state fee, unless they have some sort of funding like Teaching Assistantship(TA), Research Assistantship(RA), Graduate Assistantship (GA), or something similar that comes with in-state funding option.

Even though from residency standpoint, the international student is living in the state and doing some sort of part time job on campus, they do not qualify for it. Usually, the States only consider full time working visa holders like H1B, L1 and their dependents only for the in-state tuition fee as they pay full and sizeable taxes.

Also, to qualify for in-state tuition as F1 student, you need to have certain amount of funding like 0.5 FTE (  i.e., 50% of full time employment, which is 20 hrs a week) for TA, GA or RA. In some cases, some schools give full tuition waiver for TA, GA or RA and also pay some money on top of that as stipend. So, it varies by school.

It is important for anyone to talk to your professor and financial aid office to understand all the funding options for F1 students and plan for the same.

What was your experience with in-state tuition fee ? Share your thoughts.