Recently rumors surfaced telling that Trump administration is planning to block entry of H1B, L1, J1 visa holders US entry by Executive Order. Also, it is said that they are planning to do many changes to the H1B program, including STEM OPT & H4 EAD related programs.  While these rumors are now in mainstream media as all reputed media outlets like Wall Street Journal, CNN, Fortune, and New York times have published the same rumor. Now, the big question is, “what is US President’s Power to ban entry of non-immigrants?” and what can he do with an executive order. In this article, we will review the Executive order provisions as per INA that US president gets and what has been done in the past by previous presidents on similar lines.  This will help you all get an idea on what to expect by Trump Administration for the speculated US entry ban. We will try to explain in simple plain English by taking out complex jargon.

Let’s start with the basics first and look at the term Executive Order, why is it given to president and why is it used.

What is Executive Order ? Why such power to President ?

As per US constitution, Executive Order is a written order or instruction that is given by US President to carry out an action or implement a policy. An executive order issued by the President is equivalent to law and holds the same weightage. The concept of Executive Order and power to issue them are given to the President as part of US Constitution.

The provision of an Executive order is given to president to take swift action without waiting for Congress for everything.  It is used by every president to accomplish their goals, where congress may not support it fully or if they want to take swift action in the interest of United States.  If President issues an Executive Order that exceeds the power and scope given to them as per constitution, US Congress or US Federal Courts can strike them down.

Now that we know what an executive order is, let’s look at it from context of immigration and what powers does president have in the context of banning US entry to non-immigrants.

US President Powers to ban entry of any foreigner to US

The general rules tied to entry of foreigners (called as aliens in regulations) to US are written in Immigration and Nationality Act (INA).  There are some general rules that are in place as per INA to block entry of anyone on the grounds of health, criminal, security, other grounds.  This is what the US Consulates or CBP officers do at Port of Entry. Besides those general rules, INA also gives President some broad powers to block entry of foreign nationals under couple of sections 212(f) and 215(a)(1) or 1185(a)(1). These are the ones that are commonly used by the Presidents in the past and that can be used by current President Trump as well.

Let’s look at each of these options separately. You may also watch the below video that covers the entire article info.

Executive Order based on 212(f) – Block all or Specific Categories

US President as per INA 212(f) gets the broadest authority to block anyone from entering US. Below is the actual regulation screenshot of 212(f).  It basically means that, if President believes that entry of any foreigner is not in the best interest of US, then he can by Executive Order block the entry of them as needed. This means that the President can block / suspend entry of any foreign national either non-immigrants ( H1B, L1, J1, etc.) or immigrants ( Green Card recipients). 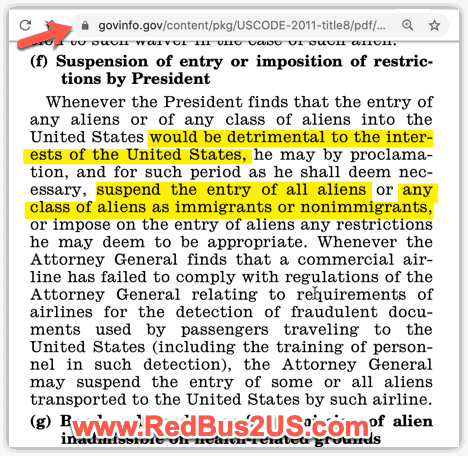 Now, the tricky part is that, the power for president under 212(f) is very broad and it does not really outline or restrict President with anything like below

As there are defined rules or guidelines and it is very broad, technically president has unlimited power to block entry as long as he can defend in court or in congress that it is in the best interest of US.

Which all US Presidents have used 212(f) to block entry to US ?

Many presidents have used this power given by INA to block entry of immigrants and non-immigrants from certain countries or doing certain activities. Most of these are issued, if US does not agree with some country’s or group’s actions, including if they are a threat to the US. Below are few examples of such instances of Executive orders issued by Presidents like Obama, Bush, Clinton, Regan from 2016 to 1988.

Yes, US President can block entry of any non-immigrant using INA 212(f) provision by issuing Executive Order. It gives president more or less unlimited power to block entry of H1B, L1, J1 or any other non-immigrant visa holders. As most of you know, Trump already used that power and issued Executive Order to block entry of Green Card Holder to US for 60 days.  Now, the justification that Trump may give to US Federal courts or congress, who may challenge his decision can be very straightforward and Trump administration may just use the US Unemployment rate for it.

Trump Administration may defend the executive order by saying “current US Unemployment rate is at 13.3%, which is highest rate since 1948. See below graph. Allowing temporary foreign work visa holders like H1B, L1, J1, etc. may not be in the best interest of US as it will not help the unemployed US citizens, who already lost jobs with the coronavirus pandemic and foreign workers entering US may add additional competition.”  Even if the reality on the ground that says H1B or L1 visa holders may or may not be displacing US workers or competing with US citizens, it may not prevail as President may use the current economic situation and ban the entry, and may get away in Federal Courts or Congress. This is where the lobbyists and business groups come in and try to lobby for what works for business…

Now that we know about 212(f), lets look at the second option.

As per the regulation 215(a)(1) or 1185(a)(1), President may also use this clause to issue executive order . Under this regulation, unless ordered by President of US, it will be considered as unlawful for any foreigner to enter or depart from US.  See below the exact regulation text.

While, this is not the most popular one that is used often, but it was used by President Carter during Iran Hostage Crisis to order revocation of immigrant and non-immigrant visas issued to Iranians. Check Executive Order 12172

Looking at above two options, it is likely that President Trump could use power vested under 212(f) as it provides broader powers to ban entry of non-immigrants to US.

Now that we know, what President can do with Executive orders, let’s also look at what he cannot do with an executive order.

If you look at the President powers given under INA, they are primarily aimed at banning entry of anyone, who may not be in the best interest of US.  President does not have direct authority to change general DHS regulations tied to H1B Program, STEM OPT, or H4 EAD. The reason is, they all went through 9 Steps of US Federal Rule Making Process and they all need to follow the same process for removal or changes.

So, if someone says, STEM OPT will end tomorrow by Executive Order, it will not happen. Same is the case with H4 EAD, it cannot be ended abruptly by president’s Executive Order, unless there is a court injunction order.  They all need to go through federal rule making process. What President can do is ask DHS to prioritize the same and speed up the process for the same as it is national priority with coronavirus. In fact, all of these related to H1B, L1, OPT, H4 EAD are already part of Unified Agenda from Fall 2019. As they are already part of Trump Administration’s agenda, now they may get more attention and may speed up the process.

Overall, as we fact check US President’s Powers, it is pretty clear that they have the power to ban entry of anyone to US such as H1B, L1, J1, etc. visa holders. Now, the big question is, will the current Trump Administration do it or not…With elections coming later this year and the state of the US economy, anything is possible. So, be prepared for anything.

What do you think President Trump would do ? Your thoughts on the entry ban ? Share in comments section below.