USCIS updated H1B cap count numbers yesterday.  They updated count considering all the petitions received until June 1st, 2011.  History of the Cap count Updates are tracked on our H1B Visa 2012 Cap Count Tracking page as well.
Here are the numbers :

Less number of jobs(54,000) were added in May, which is less than one fourth the number of jobs added in April, raising more concerns about the state of US economy. Consumers have cut back on discretionary spending, gas prices are soaring…Many are not sure if this slow down in economy is temporary or could last longer…In a survey done by Chicago Fed, the results indicate that US GDP growth will slow down this year from 2.8 % last year to 2.6% this year…but, in 2012 we may expect it to grow at 2.9%…we just have to wait and see… Some analysts expect to see more movement in later part of 2011….In any case, from H1B holders perspective, the quota is most likely to last much longer…you have ample time to look for a job…

What do you think of the drop in H1B cap numbers ? 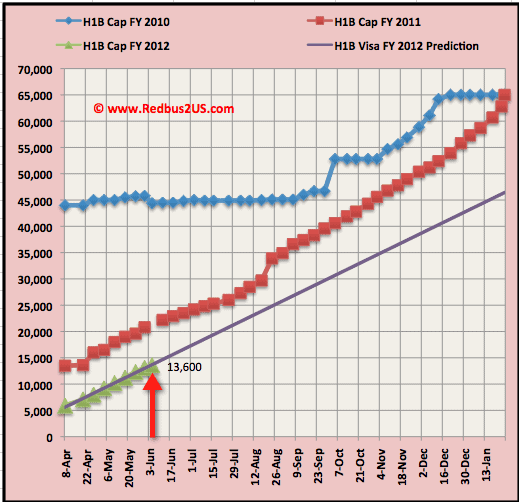