USCIS release cap count update this time within a week and the H1B cap count as of June 25th, 2010.  Below is an update since previous cap numbers :

H1B Visas issued in India go up. Analysis of H1B filings this week :

The average H1B petitions filings almost at the same pace as last week.  As I wrote on June 24th H1B cap Count analysis, the new petitions filing has not increased. There has been no ground breaking news in the last weeks. As per business week article today, the consumer confidence has sunk and is very low. The concern is over unemployment and not many jobs added in this month. Also, few of the southern states consumer confidence is low based on the BP oil spill concern. Overall, the current outlook is not going to bring any drastic changes to the H1B employees or filings.

Recently one of our readers, Sheakar, posted a news article: Time of India Article saying H1B is back in Demand, and asked my comments and opinion. If you read the article, they say that, the number of work permits issued this year in India surged and they expect a year on year growth of 10%. Also, it says, “The number of H1 visas issued in the year to June 25, 2010 stood at to 55,477, as compared to 55,050 in the same period for the previous year. Likewise, there has been an increase in L visas too, from 31,314 to 35,504 in the same period.”

My opinion as I already answered is :  Well, I do not think I will buy their prediction that H1B FY 2011 quota will be done by August…unless something drastically changes and there is a steep curve in the demand with more jobs created. I am not just speaking this as my opinion,  but just based on the data of H1B visa 2011 petition filing trend and prediction using the current trend. The point they are trying to say in article is, the visas issued are increased, that’s a valid point. I believe those visas are given to people with H1B and L1 petitions approved last year or even before. I knew three of my friends who had visas approved last year and before, but just got visas this year and came to US recently. It is a good sign for market for existing approved petitions, but the New H1B visa petition filings rules are more stringent and It is a little tough….

What do you all think about times of India article and H1B cap count ? 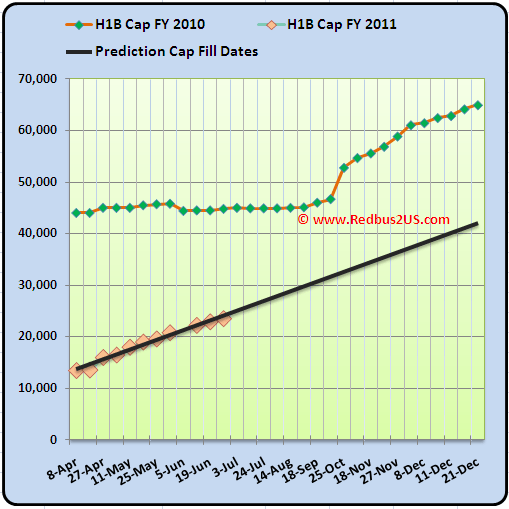 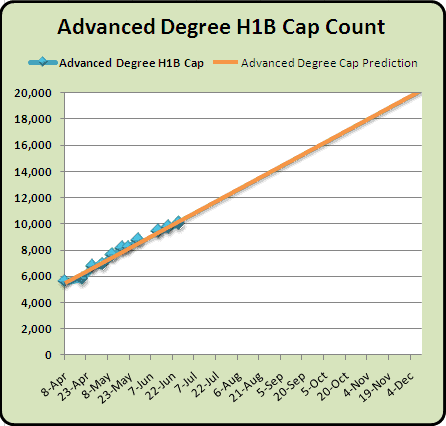