Typically, USCIS releases its weekly H1B cap count updates on Monday, it got delayed by a day this time….Anyways, they released the cap count updates for fiscal year 2013 earlier today . The numbers include all the H1B petitions that USCIS received until Friday, May 18th, 2012. Below is the summary of the count updates:

It seems like the demand for highly skilled workers is increasing every week…We are noticing a continued uptrend in the H1B filings in the past three weeks. The volume of H1B petitions filed increased continuously in the past three weeks. As we compare with last week May 14th, H1B 2013 cap count update, the regular quota cap count increased by about 1,100 from 4,200 last week to 5,300 this week…On the same lines, Master’s degree quota filings also increased slightly by 100 from 1100 last week to 1200 this week. USCIS received the highest number of petitions under regular quota for this season in this week. We are not sure if the trend would continue….Overall, the total H1B filings were up by 1,200 from 5,300 last week to 6,500 this week.

The H1B visa 2013 predictions moved a little closer as the volume of regular quota filings continue to increase every week. The regular quota prediction date has moved by about 4 days since last week and the cap could be exhausted by July 4th, 2012 . Unlike, the advanced degree quota prediction date did not change much and it can be exhausted by June 17th, 2012. We are left with 23,000 H1B visa Slots under regular quota and 4,000 H1B slots under masters degree quota for fiscal year 2013. It has been about a week since the Spring graduation, ideally, the LCAs would have been filed for these new graduates, who are seeking H1B visa this year…we can expect some spike in Master’s quota in the next couple of weeks. The prediction date could even come closer…So, if you are a student and seeking a H1B visa for FY 2013, hurry up !

As we look at US economy, nothing ground breaking this week. The unemployment rate continues to be flat…The National Association of Business Economics ( NABE) forecasts that the unemployment rate will hit 7.5% by end of 2013 and could reduce to 8% in fourth quarter of 2012…No changes in the US economy GDP forecast though…Also, good news from the Housing market is that there has been rise in sales of existing homes, it is up by 3%.  Overall, the pace of hiring seems to be sluggish, but lot better than last couple of years. In fact, the unemployment rate reduced in all the states, except two, from last year…The Startups ecosystem in the silicon valley is doing really good, most of the companies are tech startups and they need Highly skilled labor…So, I expect the H1B visa workers demand to be high…

What are your thoughts US economy and Startups ?
How about the H1B demand ? 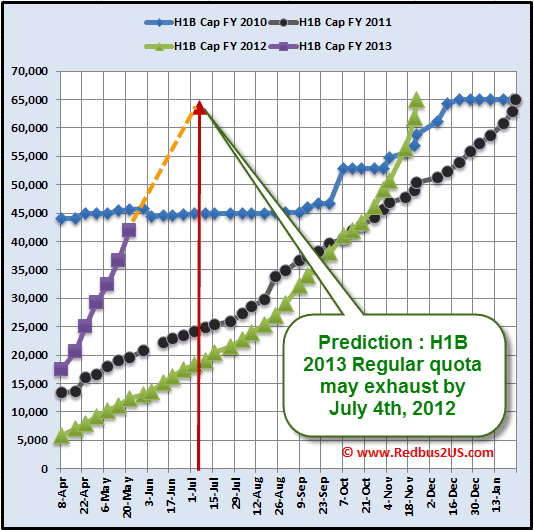 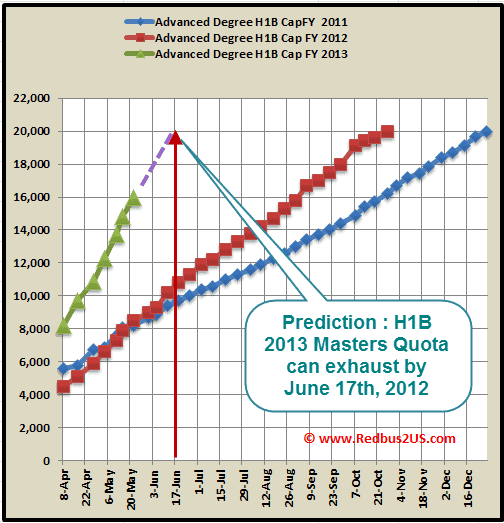